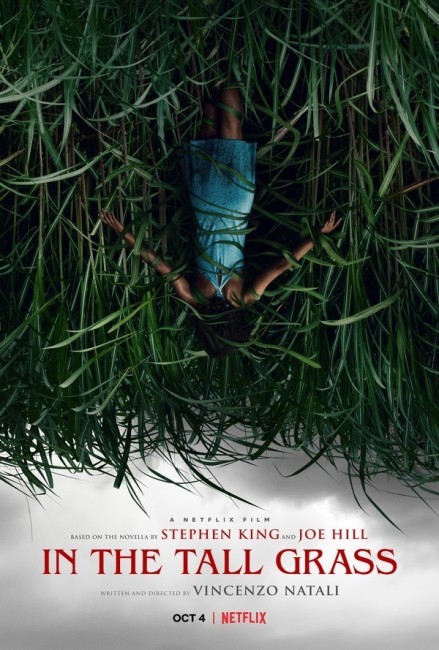 Cal DeMuth is driving to San Diego with his pregnant sister Becky so that she can give the baby up for adoption. Stopping off in the middle of nowhere, they hear the voice of a boy Tobin calling for help from the long grass that surrounds the road on either side. They venture into the grass to find Tobin but soon become separated and lost. As they variously encounter Tobin and his father Ross Humboldt, they discover that the grass is a maze where things keep shifting around in time and space and that it will not allow them to leave. Travis McKean, the father of Becky’s unborn child, comes searching for them – they have been missing for two months, although for them only hours have passed – but becomes lost in the grass too. As they search for a way out, it becomes apparent that the ancient rock at the centre of the grass maze is something that infects those that touch it with a religiously crazed fervour and brings out something dangerous.

There are probably few who do not know who Stephen King is. If there is any doubt of the influence he has over the genre, look at the lengthy list of works that have come out adapted from or written by him at the bottom of the page. Joe Hill is a less well known name who has been on the rise in the last few years before he was revealed to be Stephen King’s son. Hill has written several novels with Heart-Shaped Box (2007), Horns (2010), NOS4A2 (2013) and The Fireman (2016), which have achieved some best-selling status. (Incidentally, Joe plays the young kid who has his comic-books thrown away in the wraparound segments of the King scripted Creepshow (1982) and its sequel). There have been adaptations of Hill’s works with the Alexandre Aja film Horns (2012) and the tv series’ NOS4A2 (2019-20) and Locke & Key (2020- ). In the Tall Grass (2012), a novella published in Esquire magazine, was the second writing collaboration between King and Hill.

Vincenzo Natali is a Canadian director who made an impressive debut with Cube (1997) and from there went onto make the consistently excellent likes of Cypher (2002), a Philip K. Dick-ian reality bender about brainwashing; Nothing (2003) about two losers who are left trapped in a blank white void; the genetic engineering film Splice (2010), the mind-bending ghost story Haunter (2013) and the U is for Utopia segment of ABCs of Death 2 (2014)

Looking at the film without any awareness of its provenance, In the Tall Grass feels more like a Vincenzo Natali work than a Stephen King work. (Joe Hill has less than a half-a-dozen books under his belt so it is early days to say what the common themes in his work are). King had dealt with mysterious cornfields before in the original Children of the Corn (1977) story, since multiply filmed beginning with Children of the Corn (1984) – but there the fields were more backdrop and never ventured into, nevertheless were said to feature the lurking entity of He Who Walks Behind the Rows.

On the other hand, Vincenzo Natali loves to make films about people caught in labyrinths or puzzling realms – the whole of Cube was centred around people trying to find their way out of a maze of identical rooms, while Nothing was about two characters trapped in a blank white void and Haunter centred around Abigail Breslin trapped in an afterlife timeloop. Although if anything, In the Tall Grass resembles the Cube sequel Cube2: Hypercube (2002), which had the spatial geometry of the maze bending back on itself and across time. Did In the Tall Grass not come with the King/Hill pedigree, the central premise of a group of people trapped in a field of grass that keeps topographically shifting and conducts weird perturbations in time seems tailor-made for Vincenzo Natali’s sensibilities.

In the Tall Grass emerges as a solid film. It is a film carried almost the entire way by its premise – of watching the characters, their interactions and attempts to make sense of the situation. The film follows the original novella very closely, although extends the drama more in the latter half, particularly with the introduction of the new character of Travis. Things get a little vague towards the end where it doesn’t feel as though the film ties the show together in a fully dramatically satisfactorily way. Not to mention, you end up wanting to ask more questions about the nature of the stone and exactly what happens when people touch it. It is good however to see Patrick Wilson in a bad guy role with his turn to the dark side providing the film’s best dramatic moments.