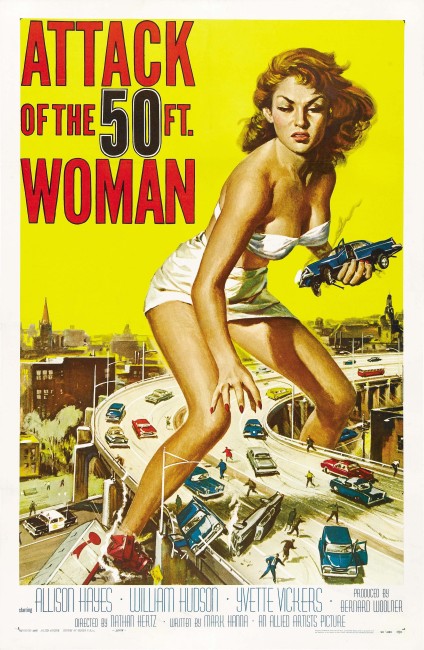 Heiress Nancy Archer is driving in the desert when a satellite comes down near her car and a giant emerges. She returns to town but her husband Harry is too busy making out with the cheap slut Honey Parker to care and the police put Nancy’s story down to just another of her drinking binges that have had her committed to an asylum in the past. Harry sees this as an opportunity to have Nancy deemed mentally ill so that he can get his hands on her $50 million inheritance. However, Nancy is abducted a second time and is returned, grown to fifty feet in size. At giant size she now discovers that she no longer has to put up with Harry’s scheming and unfaithfulness.

Attack of the 50 Foot Woman is a bad film with an incredible notoriety, something that has of course perversely gained it a cult of admirers. It is not a particularly good film – in fact, is an extremely bad one with little in the way of the redeemingly bad. It gives the impression of having been made in an effort to rip off The Incredible Shrinking Man (1957), which had been made only the year before – the plot suggests The Incredible Shrinking Man crossed-hatched with a torrid 1940s film noir thriller. Like The Incredible Shrinking Man it is almost a proto-feminist film – although in a hardly serious way – nevertheless the image of Allison Hayes smashing her way up through the roof of the house does momentarily achieve a wild exhilaration.

Attack of the 50 Foot Woman is fascinating to watch for the complete lack of conviction the special effects have. These are particularly noticeable during Allison Hayes’s rampage through the town – the same piece of footage of her walking is used several times over, sometimes reversed and against different backgrounds. A shot of her behind a power pylon contains some incredibly shoddy back projection and the alien giant is simply double-exposed over the background. We never see the giants and the humans in the same shot. And when Allison Hayes smashes her way through the buildings, the closeups that focus on her in no way match what we see happening with the absurd giant papier-mache hand.

The script contains its fair share of howlers such as the tv news bulletin in the opening minutes where the announcer points to the locations of the various satellite sightings, including Auckland, New Zealand, which is indicated as being somewhere beneath Cape Horn. Interestingly, the UFO mania that hung over many early 1950s alien invader efforts has now become, following the then contemporary launching of Sputnik in late 1957, replaced by satellites – thus we have a spate of Unidentified Satellites spottings around the world.

It is hard to believe from the cheapness of the production that director Nathan Hertz made the great The 7th Voyage of Sinbad (1958) the same year – although perhaps realizing what a cheap end of the genre he was working in here, Hertz chose to bill himself Nathan Hertz here instead of the name Nathan Juran he used on Sinbad and subsequent films.

Hertz/Juran’s single virtue lies in his choice of a good cast. Allison Hayes, who gained a minor cult for the half-dozen or so B-movies she starred in, is reasonably effective – in the scenes with her storming around the town in a cloth bikini she seems to attain a coolly otherworldly beauty. She however has the film stolen out from under her by Yvette Vickers who plays the role of Honey Parker as as much of an cheap slut as 1950s morality codes would allow her to get away with.

Nathan Juran’s other films are:– the historical horror The Black Castle (1952), the invading alien brain film The Brain from Planet Arous (1957), the giant bug film The Deadly Mantis (1957), the alien invader film 20 Million Miles to Earth (1957), The 7th Voyage of Sinbad (1958), the fantasy adventure Jack the Giant Killer (1962), the H.G. Wells adaptation The First Men in the Moon (1964) and The Boy Who Cried Werewolf (1973) wherein he reunited with Kerwin Mathews.