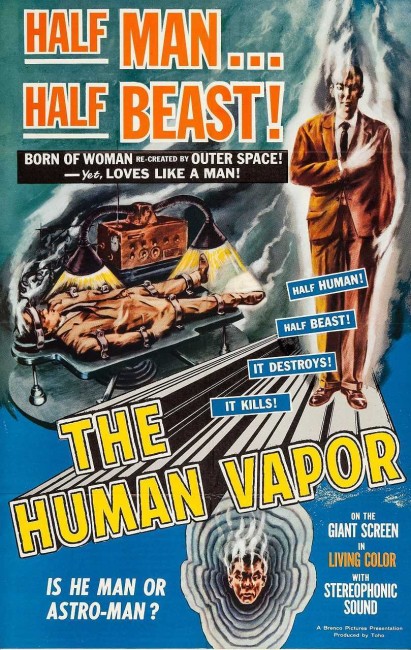 A man, Mizuno, calls a group of journalists to a meeting and explains to him how he became the super-criminal who was hunted by Tokyo police as The Human Vapor. He was a meek librarian before being approached by the scientist Dr Sano who wanted him as a test subject for the space program. Instead, Sano subjected Mizuno to radiation that caused him to become able to transform into mist at will. Mizuno soon realised the power that this held for him and used the ability to effortlessly enter bank vaults and steal money. His intention was to give the money to Fujichia Kasaga, the dancer he loved who had fallen on hard times so that she could stage a comeback. When the police discovered Fujichia was receiving the stolen money, they instead arrested her as the only means of getting to The Human Vapor.

Japan’s Toho Studios and director Ishiro Honda had had a huge hit with Godzilla, King of the Monsters (1954). Godzilla inaugurated the genre of the Japanese monster movie and Toho and Honda went onto make several other monster movies and Godzilla sequels, and other works like The Mysterians (1957). (See below). These films draw from American models – Godzilla is a superior rehash of The Beast from 20,000 Fathoms (1953), while The Mysterians takes on the American alien invasion film typified by The War of the Worlds (1953).

The Human Vapor can perhaps be construed as a thematic follow-up to Honda’s The H-Man (1958) about a radioactive glowing blob that attacks humans. This was part of a spate of film that Tho made in the early 1960s featuring mutating super-villains along with the likes of Secret of the Telegian (1960) and Attack of the Mushroom People/Matango, The Fungus of Terror (1963). Although the clear influence on The Human Vapor was the modestly effective American The 4D Man (1959), which had scientist Robert Lansing discovering he is able to become an insubstantial phantom at will.

All of Ishiro Honda’s films are special effects spectacles. In fact, there is almost nothing else to them – the human element is an afterthought that trails a long way behind other considerations. The Godzilla films and The Mysterians are spectacles of mass devastation but with The Human Vapor an effort was at least made to write in a human story. However, the results are ungainly.

The film is static and slow. The bank robbery getaway and car chase through the city into the country is incredibly dull – most of it seems to consist of wide-angle shots of cars driving and cuts away to various shots of the city. The middle of the film with the Vapor Man, cops and reporter girls following the dancer becomes dull and drawn out. (On the plus side, Keiko Saha as the girl reporter has a warm and sparklingly assured presence over and above the usual bland, demure girls who appear in Japanese fantasy cinema). Regrettably, it is the attempt to introduce a human element that drags this one out.

Ishiro Honda is not a dramatic or an actor’s director and the film works best when it allows him to get back to the effects sequences. Certainly, these are excellent with some eerie effects with the hero transforming into the Vapor Man – developing a glowing face, assembling out of vapour in reverse motion camera effects, of suits collapsing as the Vapor Man emerges or he evaporating so that he can squeeze between the bars of a cell door. Occasionally the romantic relationship manages to have some effect despite the dullness. The heroine opines corny but oddly affecting lines like “To me he is not a vapour man, he is all that is wonderful.” The tragic ending is modestly affecting.