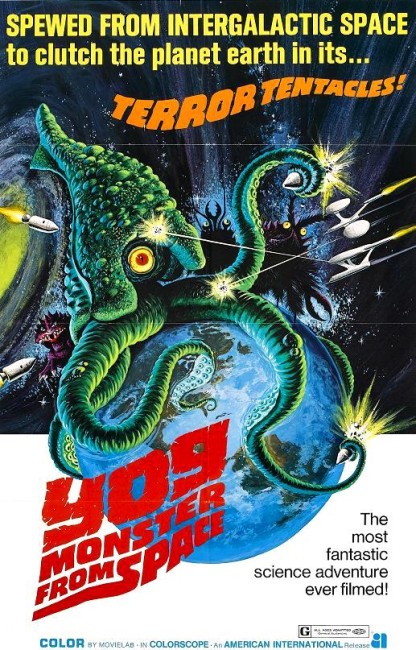 An alien force takes over an unmanned Jupiter probe as it returns to Earth. The probe comes down in the Pacific and is seen by Kudo, a Japanese photographer on assignment. However, his editor dismisses his pictures as fake shots. Kudo accepts a job to photograph a hotel construction project on a nearby island. There native lifeforms – a squid, a crab and a turtle – taken over by the alien and made giant-size start attacking the islanders.

Director Ishiro Honda (1911-93) was the cornerstone of and is largely responsible for the creation of Japanese fantasy cinema (or at least its pop culture equivalent). Honda directed Godzilla, King of the Monsters (1954), which inaugurated the Japanese monster movie, and then The Mysterians (1957), which created the Japanese space opera. Both are prolific genres that are still being successfully milked to this day.

Honda made a good number of other classics from the late 1950s to the early 1960s, including the likes of Rodan the Flying Monster (1956), The H-Man (1958), Mothra (1962) and Matango the Fungus of Terror/Attack of the Mushroom People (1963). Towards the end of the 1960s, some of Ishiro Honda’s films were starting to seem sloppy and hurried. Both Godzilla’s Revenge (1969) and Yog – The Monster from Outer Space would have to count as Ishiro Honda’s worst. Yog was his second-to-last film, after which he went into semi-retirement, although did make a worthy comeback with Terror of Mechagodzilla (1976).

Yog – The Monster from Outer Space has been made on a penny-pinching budget. The effects are laughable with patently obvious rubber creations that have unmoving eyes, which are replaced by animated cartoon tentacles when the creature has to pick up extras in medium shot. The giant squid is one of the most ridiculous of all Japanese monsters and the final tag-team wrestling match is hilarious.

What Ishiro Honda seems to lack this time about is the ability to craft his monsters into symbolic archetypes that made his earliest monster bashes such classics, or even the sense of colourful tongue-in-cheek nonsense that made the later Godzilla films entertaining. The results are that the gaping inadequacies of the genre are written even larger and come without saving merit. The stilted dubbing offers many howlers – even more so than usual, nobody seems to have cared and the dubbing often does not even attempt to approximate when the actors mouths are moving.