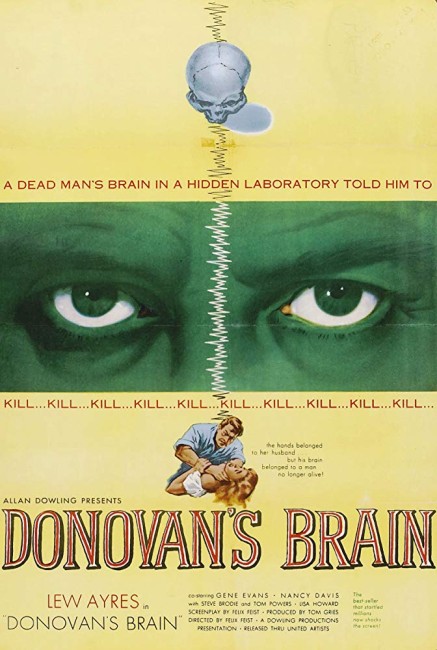 Dr Patrick Cory succeeds in surgically removing the brain of a monkey and keeping it alive in a tank in his laboratory. When the plane of millionaire William Donovan crashes nearby, Cory removes Donovan’s brain and keeps it alive in the tank. However, Donovan’s domineering will asserts itself from the tank and takes over the mind of Cory, forcing him to continue Donovan’s corrupt financial schemes.

Curt Siodmak’s novel Donovan’s Brain (1943) has proven a fertile source work for filmmakers, having fuelled three film adaptations – The Lady and the Monster (1944), this, and The Brain/Vengeance (1962), as well as a classic radio adaptation for the series Suspense by Orson Welles in 1944. More than that, the book is also the source for the venerated B-movie cliche of the disembodied brain exerting its influence on people from a tank. Although the idea of disembodied brains originated with H.G. Wells, it was Curt Siodmak that created this great cliche that has inspired numerous brain transplant and brain control movies – indeed, this is one science-fiction cliche that gained its real life on the B-movie screen rather than in pulp.

Curt Siodmak’s book was never more than routine and none of the resulting films are any different. The various versions have tended to change with the times – The Lady and the Monster, coming at the height of the mad scientist film, added a clearly mad Erich Von Stroheim to the story and set the laboratory in a Gothic castle. In the 1950s, when this version was made, the major threat that many science-fiction films saw was ‘the brain’ itself – or more so the unrestrained mind free of its body and thus the anchor of emotional sensibility. The likes of Forbidden Planet (1956), Invasion of the Body Snatchers (1956) and Fiend Without a Face (1958) see the greatest threat as coldly logical, inhumane reason that lacks any human warmth.

Donovan’s Brain is not a particularly good film. The script spends much time following Donovan’s schemes but never allows these to amount to anything significant. The dialogue is incredible pompous – it is some of the most atrocious pedestal pontificating in 1950s science-fiction. Nancy Davis anguishes as Lew Ayres removes monkey brains:

“It seems so pointless. Four wasted lives.”
“Monkey lives?” he replies, “And is it pointless for animals to help save human lives? One soldier, one mother in an auto accident, one half-drowned boy, one baby girl feverish with freckles and a dimple.”
“You’re right, darling, I’m being silly.”
“Thanks, dear. Now will you go and make us one of those wonderful stews.”

Lew Ayres gives a wimpy performance – there is one moment in the hospital bed where he changes from the ineffectual Cory to the cruel and domineering Donovan in the space of a shot – but otherwise the great melodramatic potential of such a performance is completely wasted. Later to be First Lady Nancy Davis (Reagan) plays the hand-wringing wife role – it is amazing that Donovan’s Brain has never been rediscovered and developed a kitsch cult in the same way that Ronald Reagan’s films were. One’s personal contempt of the hideous values the Reagans embodied aside, she is awful, almost completely sexless.

Director Felix Feist made a number of films throughout the 1930s, 40s and 50s, before moving into television in the 1960s. His only other genre contribution was the catastrophe film and first ever disaster movie Deluge (1933). He was also the stepfather of popular fantasy author Raymond E. Feist.