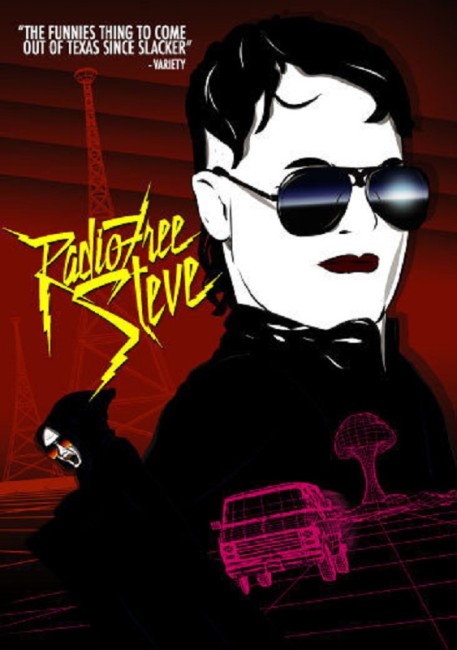 In 1999, video editor Steve Glenn meets famous international director Lars von Biers who inspires him to complete ‘Radio Free Steve’, the film Steve shot in 1984. Steve screens it:– It is 1985 following the nuclear holocaust. Steve, along with his girlfriend Sheena, wanders the post-holocaust landscape in a van, killing mutants. He conducts pirate radio broadcasts as Radio Free Steve in protest against the FCC who control all broadcasts bandwidths mandating the broadcast of only the Emergency Signal. Steve is pursued by his former friend Dirk Benedict, now operating as a bounty hunter for the FCC. Steve then learns of television broadcasts of MDV music videos coming from Los Angeles and sets out to find fame there.

Radio Free Steve is a film that could almost have been designed to defy easy description. Imagine a no-budget, video-shot cowpunk version of Damnation Alley (1977) if you want some idea. It is a hodgepodge of Mad Max 2 (1981) post-holocaust cliches have been conflated into a totally gonzo, half made up on the spot, next-to-no-budget film that frequently defies belief.

The basic premise – what plot there is – seems like a tongue-in-cheek variation on Damnation Alley – a quest in a van across a post-holocaust terrain (where the crew shot on the road while traveling across Arizona, Texas, Nevada, California and New Mexico) in search of a video-broadcast picked up from the other side of the country. The plot throws in encounters with mutants, preachers, gay pirate-radio broadcasters, assorted crazies, sidetrips to an ashram of sorts, a venture to The Burning Man festival where the hero engages in a breakdancing competition.

There is a little of The Omega Man (1971) with the hero staking vampires along the way. There are also peculiar references to tv’s Battlestar Galactica (1978-9) – a preacher named Richard Hatch and the hero’s primary nemesis Dirk Benedict, both characters being the names of the two lead actors in Galactica.

There is also a peculiar framing device set in the present-day where internationally renowned filmmaker “Lars von Beers” inspires the now middle-aged Steve to revive the film. The ending throws logic and story fairly much to the wind and has Steve arrive in Hollywood where (with an appearance from The X Files/The Lone Gunmen‘s Dean Haglund), the film becomes an amusingly sharp satire on the Hollywood sell-out and the mass merchandising of rebellion.

There is a grungy, ragged, in-the-rough edge to Radio Free Steve that almost collapses into total amateurishness at times. Things frequently get silly – the cast often puncture the envelope of reality by reacting direct to the camera. On the other hand, the film keeps working away at one until it has too much in the way of zany creativity and sarcastic anarchy not to be likable.

Radio Free Steve falls into a body of no-budget films that colonized the post-holocaust venue as a realm for surreal whacked-out humour. Recent others include Six-String Samurai (1998) and Superstarlet A.D. (2000). Both Radio Free Steve and Six-String Samurai have many similarities – both features heroes whose moves are an exaggerated parody of bygone forms of cool and who are engaged on a crusade to bring rock music to the post-holocaust world.