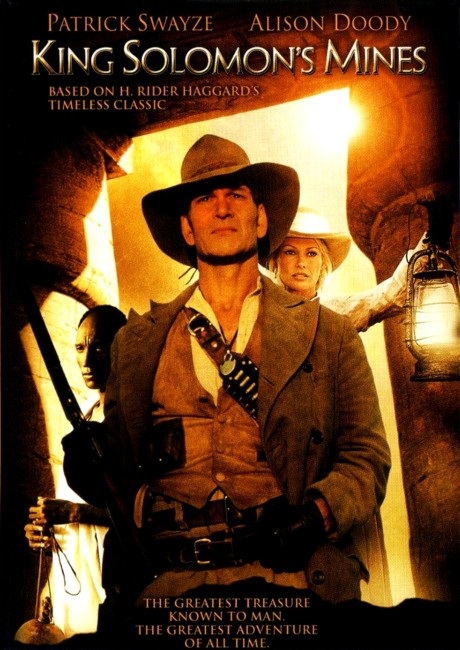 In Africa, archaeologist Samuel Maitland is captured by Twala, the despotic king of the Kuakuanis tribe. Twala demands that Maitland give him the map to the legendary mines of King Solomon, which are reputed to house a fabulous stone that will grant dominion over all the tribes. However, Maitland has sent the map to his daughter Elizabeth in England. When a letter comes demanding that she deliver the map to Twala, Elizabeth goes to find the adventurer Allan Quartermain, showing him a note from her father telling her to find him if there is any trouble. They set forth for Africa to exchange the map for her father. As their plans go awry, Quartermain decides the best course of action would be to mount an expedition to find the mines themselves. They are pursued by a ruthless agent of the Tsar who is determined to procure the mines’ wealth for his country and has teamed up with an embittered former colleague of Quartermain.

This version comes from Hallmark Entertainment, an offshoot of the Hallmark Channel and Hallmark Greeting Cards. Since the mid-1990s, Hallmark have become prolific producers of lavish mini-series and tv movie adaptations of popular literary classics and fairytales. (See below for Hallmark’s other genre-listed efforts).

One sits down to watch Hallmark’s King Solomon’s Mines with equal amounts of interest and trepidation. What must be said is that of all the versions of the story seen on screen so far, this production is the one that follows the plot of the book the closest. The series introduces many characters from the book – Sir Henry, Captain Good, Twala, Googal – that have not made appearances on screen before. There are certainly a number of changes as well. Most notably the mini-series eliminates the character of Sir Henry’s brother who is the one that inspires the quest for the mines in the book. In its place, the mini-series adds Alison Doody as a romantic interest (a feature that was also added by all the other film versions) and has the quest now to be to find her father (a plot element that is taken from the 1985 film version rather than the book). The series also bumps the basics of H. Rider Haggard’s book up considerably – besides giving the story a love interest, we also have the addition of pursuing Tsarist heavies and an embittered ex-colleague of Quatermain’s. There is also the subtle addition of some minor fantasy elements – a prophetic shaman woman and most notably the mines now no longer being a source of diamonds but also containing a mystical stone that grants dominion over all the other tribes.

The place that King Solomon’s Mines sinks considerably is where Hallmark have seen fit to cast the role of Quatermain (who here also gets an ‘r’ in his name to now become Quartermain) with Patrick Swayze. For a brief time in the 1980s, Patrick Swayze was considered a heartthrob. In actuality, Swayze only had about two hits – Dirty Dancing (1987) and Ghost (1990) – and spent the rest of the time playing in formula bloke pictures. He was widely decried for lack of acting talent and spent the latter half of the 1990s in a career slump trying to regain those heights. As H. Rider Haggard’s larger-than-life African adventurer, Patrick Swayze is simply miscast. The role is of Allan Quatermain is surely one that requires either an heroic leading man type or else the grizzled Indiana Jones character. Patrick Swayze plays the part with the same jaw clenching, intense stare that served throughout all his other roles.

Alas, by this point, Swayze is age 52 and while he tries hard, his leading man looks are not what they once were. Certainly, they are not enough to carry a larger-than-life part on its own and his slim acting abilities are nowhere near adequate to carry the rest of the role. Case in point being the would-be romantic scene between he and Alison Doody (who, compared to Swayze, is fine in her part) near the end, where his attempt to propose to her is nearly killed by Swayze’s complete lack of expression. Swayze is also crippled by the fatal flaw of timing – when viewing his Quatermain it is hard to get out of one’s mind Sean Connery’s fine portrayal of the aging Quatermain in The League of Extraordinary Gentlemen the year before, where Connery played the part with dignity and authority. The other main complaint is that Quatermain is American rather than British. (Mindedly all the other above-listed film versions cast Quatermain with Americans, rather than British actors). This does noticeably jar when the series takes us back to England to visit Quatermain’s home life.

This is also a somewhat wiggist version of King Solomon’s Mines. That is to say, it is a version that writes modern attitudes and assumptions over the story. Rather than a big game hunter, the series outfits Quatermain with a prologue where he does the Politically Correct thing and protests against hunting and animal slaughter. The series also outfits Quatermain with a son. No problem with this but the story then has him engaged in the oh-so-contemporary-American problem of a legal battle to regain custody of the son from his in-laws. In actuality, other explorers of this era such as Ernest Shackleton and Richard Burton thought nothing of leaving their wives and children for several years at a time and exploring the world and this was not considered abandonment. The character of Roy Marsden’s Captain Good has been written in for no other reason than to have a series of running gags about his being fooled by wily natives or not understanding native customs. In truth, most British colonialists had such a condescending attitude towards Africans that any natives that tried to play practical jokes or laugh at a Britisher would have in all likelihood been shot or at the very least flogged for their arrogance. The most interesting character is the witch woman Googal – who looks for all the world like Grace Jones just stepped out of Vamp (1986) – and is played with a fascinating ambiguity where one can not be at all sure whose side she is operating on.

The series tends to go for a good many clichés of the African adventure story – Westerners out of their cultural depths, the evil native chief wanting to rule the other tribes, tribal music on the soundtrack. Between Patrick Swayze’s non-performance and the clichéd adventures, the mini-series takes a long time to come to life. The first half is relatively uneventful, although the show does pick up reasonably in the second half with the various shootouts, tribal fights and waterhole ambushes and some okay plot twists.

Director Steve Boyum has worked as a stuntman in the industry since the mid-1970s and began directing with forgettable tv fodder like Mom’s Got a Date with a Vampire (2000) and Stepsister from Planet Weird (2000), one genre action vehicle Timecop: The Berlin Decision (2003), one other Hallmark mini-series, La Femme Musketeer (2004) and the purportedly incredibly bad film Supercross (2005). He crafts the adventure with a certain epic feel and there is some fine location photography.