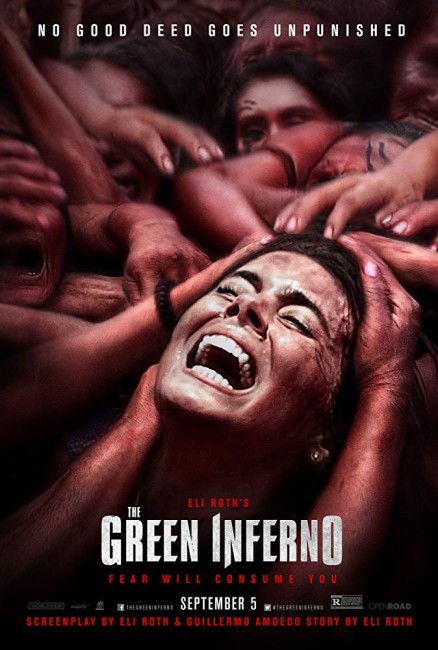 Justine is a university student in New York City whose father is a lawyer with the UN. She becomes involved with a student group led by Alejandro that is protesting against logging operations in the Peruvian rainforest. There the company’s hired militia is expected to uproot a native tribe that has never had contact with civilisation before. Justine joins the group as they fly to Peru and travel into the remote jungle. Arriving at the worksite, they handcuff themselves to the equipment while Alejandro live streams a video feed of their efforts to the world by satellite. Justine ends with a gun held to her head by the soldiers. As they are removed, she realises that Alejandro staged it so that he could take advantage of who her father is. As they are flown out of the area, the plane develops engine trouble and crashes in the jungle. Those that survive the crash are then captured by the native tribe they were trying to save – only to realise that the tribe are cannibals and are planning to kill and eat them.

The Green Inferno was the fourth directorial film from Eli Roth. Roth planted feet firmly in genre material with his first film Cabin Fever (2002) and cemented that with Hostel (2005), which became the film at the forefront of the Torture Porn fad. Roth made the obligatory sequel Hostel Part II (2007) but then seemed to languish in greenlight limbo with various projects for the next few years. The Green Inferno was his next film and premiered at the Toronto International Film Festival in 2013 only to spend two years held up in distribution limbo. It was finally picked up in 2015 by Blumhouse and went into wide release ironically only two weeks before Roth’s next film Knock Knock (2015) came out. Roth next went on to the remake of Death Wish (2018) and the family film The House With a Clock in Its Walls (2018).

The Italian cannibal film of the 1970s and early 80s has a reputation as being possibly the most extreme horror films ever made. Under the ostensible guise of the depiction of tribal practices, filmmakers served up a catalogue of tortures, mutilations, intestine and flesh devourings, even the on-camera slaughter of animals. The genre began with Umberto Lenzi’s Deep River Savages/Man from Deep River (1972), which can still make a claim to ethnographic quasi-realism, and hit its stride a few years later with works like Last Cannibal World/Jungle Holocaust (1977), Emanuelle and the Last Cannibals (1977), Slave of the Cannibal God/Prisoner of the Cannibal God (1978), Cannibal Apocalypse/Cannibals in the Streets (1980), Eaten Alive (1980) and Zombie Holocaust/Dr Butcher M.D. (1980) where the emphasis was on extreme gore. The two most notorious films to emerge from this fad were Cannibal Holocaust (1979) and Cannibal Ferox (1981), which were so extreme they were banned in multiple countries.

Eli Roth apparently considers Cannibal Holocaust to be his favourite film and The Green Inferno has been made as homage to it and the era of the Italian cannibal film. Indeed, the title The Green Inferno was one of the alternate titles used by Cannibal Holocaust II (1988). Moreover, the end credits come with a dedication ‘For Ruggero’ to Ruggero Deodato who directed Cannibal Holocaust (and also made a cameo in Hostel Part II where he was seen eating a victim’s flesh). Not satisfied with that, Roth also includes a list of the original Italian cannibal films on the end credits as a primer for his audience. Even Lorenza Izzo’s final scene where she denies that the tribe were cannibals is reminiscent of the end of Cannibal Ferox where Lorraine Del Salle returns to deliver her dissertation that cannibal tribes do not exist.

The Green Inferno is the cannibal film updated by thirty years to take places amid issues like Amazonian rainforest deforestation and where people are able to map their journey by GPS and stay in contact by satellite phone – the end credits even include the Twitter handles of most of the principal cast. Once he gets into the cannibal scenes, Roth lets loose on all the scenes of people being torn apart, eyes gouged out and tribespeople chewing on body parts.

The downside of this is that we also have is a cannibal film with mildly known actors, a halfway decent budget and top Hollywood makeup effect house KNB EFX providing the severed body parts. It seems like the raw savagery of the 1970s/80s originals has been replaced by a slick glossiness. Crucially, while the film has a high gore factor, there is nothing that rocks the boat about the gore scenes – Roth was even able to get his cut of the film passed uncut by the MPAA whereas many of the original films were banned in multiple countries. There is nothing here that ever approaches the extremes of the originals where we saw women strung up with hooks through their nipples, dicks being cut off and eaten or animals gutted on camera. Also the characters have been imbued with a flip and knowing modern sense of humour and bickering among themselves that intrudes into the brutality.

Roth has also run the cannibal genre over with a modern political subtext. The characters in the original Italian cannibal films were all explorers or adventurers of some type and never more complicated than that. By contrast, The Green Inferno has a prologue that takes up nearly the first half of the film where Roth follows a group of American university students who venture into the jungle on a mission to preserve the tribe from loggers. This section seems set up essentially to scathingly tear apart white middle-class liberal guilt and the naive ideals of student idealism – the poster and trailer go out with the byline “No good deed goes unpunished.”

Much of the first half is spent jeering about how out of their depth the kids are beyond the realm of cellphone coverage and civilised sanitation. Increasingly the film also becomes one not merely about puncturing their naivety but hammering a stake completely through their liberal ideals – Lorenzo Izzo gets to the site and discovers that she has been set up because her father is a lawyer with the UN, while her shock at having a gun held at her head is callously dismissed “That’s the way the world is.” To further complicate matters, she finds that their entire mission was created as a blind so that a rival company could get the contract for the logging operation.

The film comes with savage irony – Lorenza Izzo’s disgust at female circumcision in the early scenes is later almost visited on her; the savage tribe they set out to save from massacre are the same ones that also end up eating most of the group. And to finally skewer any of their idealistic naivete, once we get to the scenes with the cannibal tribe, Ariel Levy as the initially charismatic leader of the protest group is played as a complete asshole who backstabs and sacrifices others to save himself.

The Green Inferno was also where Eli Roth met and subsequently married Lorenza Izzo who has become the star of all of his subsequent films. Izzo is a Chilean-born actress but speaks flawless English such that you would not know she is an average white girl from a well-to-do American home unless you actually read up on her background. Moreover, this was where Roth established a foothold in the Chilean film industry and began to partner with Nicolas Lopez who co-produces The Green Inferno and subsequently co-wrote/co-produced the Chilean-shot Knock Knock, which also reuses several of the actors here. Furthermore, Lopez persuaded Roth to co-write and play lead actor in his own directorial outing Aftershock (2012).