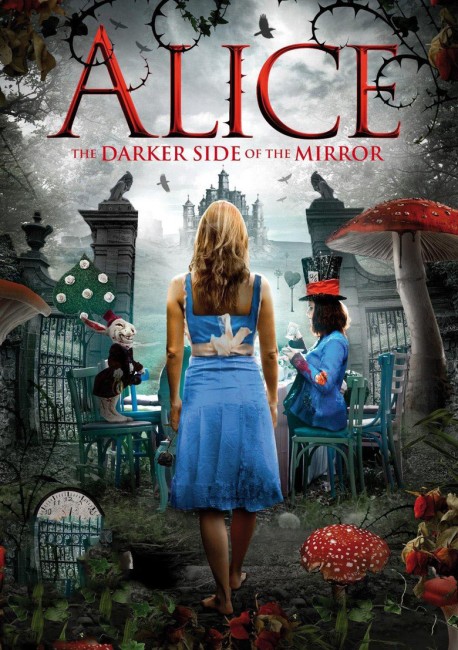 aka Alice: The Darker Side of the Mirror

It is 1905. Alice is grieving after the death of her mother and is not happy at having to go to school where they have relocated. She keeps seeing a strange man wearing white shoes. While having tea in the garden with her sister, she follows the man with white shoes down a rabbit hole and finds herself in a bewildering world. As she passes through the world, encountering its variously mad and drug-induced denizens, and trying to find her way back home again, she has difficulty retaining her size and remembering who she is.

At least this is the intriguing notion that one gets before watching The Other Side of the Mirror. I am not sure that this is something that it achieves. Some of the film seems completely arbitrary. Alice’s venture through the portal is intercut with random footage of shoals of fish and jellyfish. In one scene, for no apparent reason, she seems to stumble onto a Civil War battlefield (did I also mention that this is an Alice in Wonderland that seems to have gotten transplanted from the UK to the USA?)

There are versions of the characters that are slightly darker than usual – Doug Zwick, billed as a character called Lewis Carroll, plays the White Rabbit, March Hare and Cheshire Cat; the Tea Party happens where the Mad Hatter seems to worry about being carted away to an asylum; The Caterpillar inhabits an opium den. Towards the end, Alice is made to work in a factory, before a group of people riot in the alley outside and are beaten up by police. The head of the factory is played by Carolyn Hatch, who also plays Alice’s schoolteacher, and we realise that she is meant to be the film’s version of the Red Queen.

It leaves you wondering what the actual purpose of this interpretation of Alice in Wonderland was. It is not a parody. It cannot be said to be a modernisation – for one, it remains set in 1905 and, bar the addition of motor cars in the street and the US settings, is little different to a standard interpretation. Nor does the supposedly modern lens gives us radically different retellings of the characters as say the mini-series Tin Man (2007) and the tv series Emerald City (2017) did with The Wizard of Oz (1939).

At most, the overriding impression you get is that everybody in Wonderland seems to partake in narcotics of some fashion – Alice is given pills by the White Rabbit, The Caterpillar imbibes from the pipe as she visits him in an opium den, the attendees at the Tea Party drink not wine but cough syrup, and Alice later meets a rundown soldier (possibly meant to be the White Knight?) who shoots up heroin intravenously.

The Other Side of the Mirror/Alice: The Darker Side of the Mirror feels haphazard. It is a show put on by an amateur theatrical group (with the aid of several historical re-enactment groups) rather than a film. Occasionally the script quotes some of Lewis Carroll’s lines but mostly the plot is in a random order. It is often hard to tell how scenes relate to Alice in Wonderland. Zach Hamer’s direction is not very good, while his cast seem to be looking around for direction. An appropriate indication of how people felt about the film is the fact that it has a 2011 copyright day but was not actually released until 2016.

The Other Side of the Mirror was the second film for Zach Hamer, his first solo effort after co-directing the earlier Re-enactors (2012) about an historical re-enactment group.