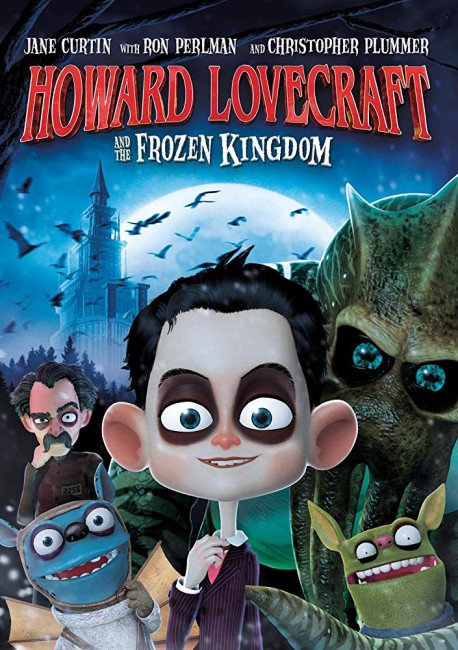 In 1897, young Howard Lovecraft is taken by his mother to see his father where he is locked away in an asylum. The doctors say Mr Lovecraft is in too deranged a condition to talk to them but Howard wanders away and finds his cell. Amid his ravings, his father talks about a book and urges Howard to destroy it. Back home, Howard finds The Necronomicon, the book that his father was talking about. Reading it, he inadvertently opens up a portal and is drawn through into the frozen kingdom of R’yleh. He is attacked by a creature Thu Thu Hmong but befriends it after he saves its life. Calling the creature Spot, Howard sets out to find a way of getting back home. They come to the Frozen Castle ruled over by the queen Algid Bunk. She persuades Howard that he must follow the path he sees in his dreams. As Howard sets out, others warn that this will wake the sleeping Elder Gods and break R’yleh from its eternal winter, spelling danger to the entire world.

H.P. (or Howard Phillips) Lovecraft only had a brief writing career (from 1916 until his death at the age of 46 in 1937). In that time, he nevertheless managed to create a body of work that has inspired a cult following. Lovecraft’s prose brims with a unique sense of cosmic horror – of Earth existing as a tiny island surrounded by powerful ancient gods waiting to return, lost cities, arcane tomes and rites, scientists whose quest for forbidden knowledge has taken them too far and individuals driven insane by sights so horrific they can only be called ‘indescribable’. It has inspired a considerable body of film work (see bottom of the page), even if most of it is a far cry from Lovecraft’s mood of dread.

We have seen some eccentric and offbeat Lovecraft-based films in the last few years – fan efforts such as The Last Lovecraft: Relic of Cthulhu (2009) and Call Girl of Cthulhu (2014). Of these, Howard Lovecraft and the Frozen Kingdom is one of the strangest. There have been several works that imagine the real-world Lovecraft in a series of fictional adventures – the novel Lovecraft’s Book (1986) by Richard Lupoff and the films Cast and Deadly Spell (1991) and Necronomicon (1993). Howard Lovecraft and the Frozen Kingdom imagines Lovecraft as a child visiting his own creation of the kingdom of R’yleh (although Lovecraft had R’yleh as a lost city located in the South Pacific whereas the film imagines it as a frozen kingdom).

The film is based on a trilogy of graphic novels created by Sean Patrick O’Reilly, a Canadian comic-book artist who manages the British Columbia-based Arcana Studios. The original graphic novels consist of Howard Lovecraft and the Frozen Kingdom (2009), Howard Lovecraft and the Undersea Kingdom (2011) and Howard Lovecraft and the Kingdom of Madness (2013). Since 2010, Arcana has maintained its own animation division where they have also produced an animated film based on O’Reilly’s The Clockwork Girl (2014) and O’Reilly has directed the animated Pixies (2015), as well as the subsequent likes of Legend of Hallowaiian (2018), The Steam Engines of Oz (2018) and Go Fish (2019).

The idea of an H.P. Lovecraft children’s film leaves you doing a double-take. Lovecraft’s protagonists are occult adventurers, scientists and questors after forbidden knowledge. Their experiences with that which lies beyond is never a good one for them and the typical Lovecraft protagonist is usually left insane by the encounter at the end of the story. None of this sits easily with what is essentially an animated children’s film featuring a pre-adolescent protagonist.

The film’s Lovecraft is conceived as a variant on the animation standard of the kid with no friends – indeed, he is more akin to Little Nemo in Slumberland than a standard Lovecraft hero. The children’s film focus does mean that some of the Lovecraftian creatures tend to get watered down. The creatures of the Frozen Castle look like cut-price versions of the Little Green Men from the Toy Story films. The squid-faced Thu Thu Hmong ends up becoming the equivalent of the big ungainly puppy in a boy and his dog relationship – Lovecraft would probably be turning in his grave at the scenes where it and the film’s Howard have a snowball fight. The film is also produced with limited animation, which weakens the film considerably, not to mention fails to do justice to the artwork of Sean Patrick O’Reilly’s graphic novels.