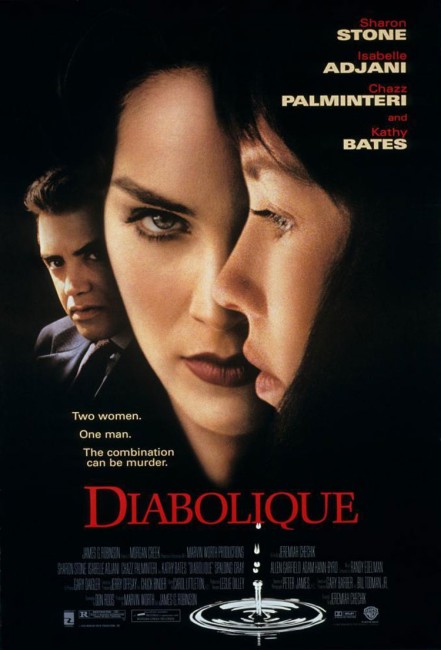 Mia Baran is owner of and teacher at the St Anselm’s private boy’s school. She is brutalised by her husband Guy who runs the school and their domestic life with a parsimonious iron fist. Guy’s mistress, the school’s maths teacher Nicole Horner, proposes a scheme to Mia – that the two of them lure Guy to her Pittsburgh home over the weekend and poison his drink. The plan is successful and they succeed in killing Guy. They then return to dump the body into the school’s pool and leave it to be found and assumed a drowning. However, the body fails to surface over the next few days. When Mia has the pool drained there is nothing there. Evidence then begins to accumulate to suggest that Guy is still alive.

Les Diaboliques (1955) is one of the greatest thrillers ever made. It was copied endlessly – but never bettered – by countless psycho-thrillers in the 1960s. It had twice been remade for tv as Reflections of Murder (1974), directed by John Badham and featuring Joan Hackett in the Sharon Stone role, Tuesday Weld in the Isabella Adjani role and Sam Waterston as the husband; and House of Secrets (1993), featuring Melissa Gilbert and Kate Vernon in the respective roles and Bruce Boxleitner as the husband. This was a further theatrical US-made remake.

Certainly, a remake of Les Diaboliques in the era of post-Basic Instinct (1992) thrillers holds much potential, one that could bring out the psycho-sexual tensions that existed in the original. Unfortunately, the remake explores none of these. It certainly follows the plot of the original closely (at least until the ending). There are a few updates – when the dead husband turns up in the school photo, it is now a promotional video being taped for the school; while the investigating detective becomes a woman.

Despite a reasonable adherence, the remake is devoid of any of the captivating suspense of the original. Les Diaboliques created genuine tension by constantly cutting back to the pool as the body failed to surface and with each revelation of something that showed that the husband was still alive. In this version, they are just mechanical contrivances of the plot that director Jeremiah Chechik serves up with dutiful contrivance but fails to milk for anything. The difference between the two films is clearly apparent – the 1955 Les Diaboliques was a template for an entire genre of films in the ensuing decade; the 1996 film vanishes without any distinction amid a horde of other psycho-sexual thrillers.

Perhaps the worst thing about Diabolique is the changes it makes to the ending – something that turns the remake into a disaster up there on the order of the American remake of The Vanishing (1993) with a happy ending, the English-language remake of Martyrs (2015) or the clueless and unatmospheric remake of The Haunting (1999). [PLOT SPOILERS] The original ending was one of the great cinematic shock twists – the husband emerges from the bath, the wife collapses dead, the husband removes his contact lenses and the mistress reveals that it was a set-up to kill the wife off all along. In this version, the wife does not die and worse the mistress has a change of heart and is not able to go through with joining the husband in killing the wife.

[PLOT SPOILERS CONTINUE] This is something that completely wrecks the tenuous contrivation of the elaborate scheme – after being involved in such a complicated and duplicitous game of deception, why does Sharon Stone have to wait right until the end to have her change of heart? Equally absurd is the requirement that we believe that the sight of Chazz Palminteri rising from the bath would be enough to cause Isabelle Adjani’s wife to have a heart attack and yet he subsequently chasing her through the school, attacking and trying to drown her would not. Moreover, the effect of the scene where Chazz Palminteri emerges from the bath wearing white contact lenses has been made more comic than frightening by too many cheap zombie films.

Sharon Stone is one of the few actresses that could be convincingly cast as another Simone Signoret – Madonna would have been even better. However, instead of bringing the sophisticated sexuality she exudes in films like Basic Instinct, Sharon Stone gives another of her intensely introverted performances. There are only a few scenes where she suggests the hard edge the character had in the 1955 version – here she criminally seems to care too much.

On the other hand, Isabelle Adjani is fine in the Vera Clouzot role. With her porcelain fragility and almost doll-like features, Adjani lends some sympathy to the part of the saintly self-sacrificing Catholic wife. Kathy Bates, who is usually always worth watching in a part, is positively awful, with a terrible monologue about mastectomies that feels like it has been improvised to fill an awkward gap.

Canadian-born director Jeremiah Chechik first appeared with National Lampoon’s Christmas Vacation (1989) and then went onto the acclaimed Benny and Joon (1993). Chechik then made Tall Tale (1995), a misfired attempt to tackle Western legends like Pecos Bill and Paul Bunyan that seemed afraid of its subject matter. Chechik’s subsequently engaged in an even more disastrous attempt to remake an excellent original – the big-screen version of tv’s The Avengers (1998). Chechik’s career floundered after that and he did not make another film for fifteen years. The surprise name on the cast list though is that of screenwriter Don Roos who would go onto write-direct fine films like The Opposite of Sex (1998) and Happy Endings (2005).