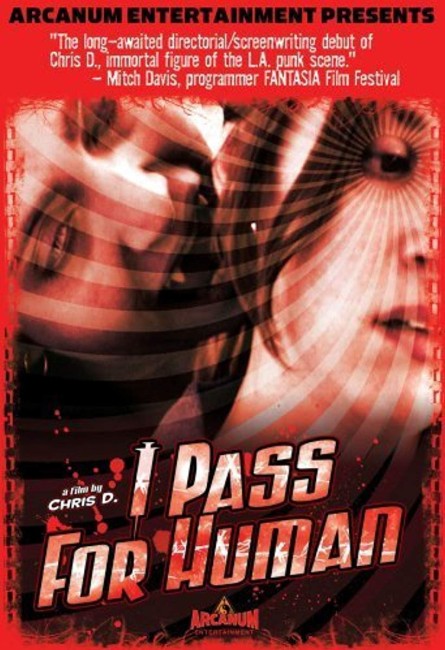 Jane’s boyfriend Dax dies from a heroin overdose. As Jane attempts to deal with the loss, Dax’s sister Mila refers her to a friend Rick whose own girlfriend Azami recently died from a heroin overdose. In hanging out with Rick and Mila, Jane is drawn to start using hard drugs herself. As she does so, she starts to see the ghosts of Dax, Azami and various other dead addicts. A therapist believes that these ghost addicts are leeching onto the living in the hope of still getting a fix.

I Pass for Human was the first feature-length film directed by Chris D. Chris D. is the professional moniker used by Chris Desjardins who is better known as the front man of the L.A. punk band The Flesh Eaters, which was formed in 1977 and are still playing and putting out records despite several break-ups and changes of personnel. Outside of music, Chris D. is an avid fan of Japanese cinema, has written the book Outlaw Masters of Japanese Film (2005) and the subsequent Gun and Sword: An Encyclopedia of Japanese Gangster Films 1955-1980 (2013), an exhaustive study of Japanese Yakuza films. Chris D. has also published two books of poetry, has a day job as programmer at L.A.’s American Cinematheque where he has arranged numerous film retrospectives, and has also contributed liner notes to various dvd releases, principally of Japanese films.

I Pass for Human was Chris D.’s first venture behind the camera, although he has written several as yet unproduced screenplays. The film seems to be not so much based on as it shares the same overlap of themes as I Pass for Human (1989), which Chris D. used as the title of an album that put out with Stone By Stone, a band he formed in between one of the Flesh Eaters hiatuses. The album was supposedly an allegory of Chris D.’s struggle with heroin addiction and break-up with his then wife Julie Christensen. (Although, other sources contradictorily state that Chris D. has never been a heroin user).

I Pass for Human was made on a miniscule budget. That said, Chris D. gets a number of cameos from well-known faces, including cult queen Mary Woronov who turns up as Eleanor Whitledge’s doctor; veteran actor John Diehl (who married Chris D.’s ex Julie Christensen) as Eva Scott’s addict ex-husband; and Jack Hill, the director of Spider Baby or, The Maddest Story Ever Told (1968), Coffy (1973) and Foxy Brown (1974), who plays Eva Scott’s father. Producer Lynn Margulies is an L.A. artist who is the sister of actor/wrestler/director/musician Johnny Legend and was the former girlfriend of Andy Kaufman. The film has also manages to array an interesting soundtrack of alternate and punk bands.

The dvd for I Pass for Human comes with an effusive set of liner notes from screenwriter Dan Madigan, which are accompanied by quotes from Dante and T.S. Eliot and compare Chris D. to both Dante and Jean Rollin. Madigan calls I Pass for Human “a cross between a scarily autobiographical documentary and a snuff film directed by William Burroughs” and “[it] is like a sucker punch to the solar plexus, it keeps you numb and sore long after the last images have flickered off the screen”. Although, in sitting down to watch I Pass for Human, I kept wondering if Madigan and I had watched the same film.

In making I Pass for Human, Chris D. claims to be influenced by 1990s Japanese horror and 1960s Italian Gothic films. Madigan notes how Chris D. has eschewed any classical horror pop-up shocks. I was prepared to give Chris D. this much but the problem is also that in terms of production polish I Pass for Human comes close to resembling the amateurish work of a novice filmmaker. What seems to be regarded as rawness by Dan Madigan might in any other filmmaker simply be called non-professional camera set-ups and lighting. Madigan wants to celebrate how much Chris D. has contravened modern horror filmmaking. Maybe. However, this also tends to make I Pass for Human a film of tepid horror elements.

Not much happens in the horror department – there is a zombie in a bathtub, a brief shot where we see two women feasting on a victim like vampires. The scenes where the various ghosts come surrounded in CO2 mist only looks like a cheap effort at creating atmosphere. There is a mildly weird scene that sits just between the effective and the cheesily silly where Eleanor Whitledge wanders the streets in a drug-induced haze, finds a mysterious couch in the middle of nowhere and sits down, only to be grabbed by a hand that snatches her ankle from underneath but is gone when she overturns the couch.

Certainly, Chris D.’s handling of the actors is professional and all give reasonable performances. Where I Pass for Human started to work, one felt, was not so much in its attempts to be a horror movie, but in its portrait of drug addiction. The film is notable for depicting drug usage without any of the melodramatic desperation and tripped-out nightmarishness of Hollywood moralising about the subject. Chris D. seems to be telling an autobiographical story with the film – it is difficult not to read I Pass for Human as an allegory for someone trying to escape from a lifestyle they see as all-pervading – but it is certain that he has spent some time around people like those depicted in the film.

Once the film draws us down into Eleanor Whitledge’s tripped-out nightmare, Chris D. may not produce any profound shocks but there is a certain dream-like fugue to the film, something that is greatly aided by the soundtrack. The script does not do a lot in explaining why drug addicts have returned as ghosts or why only users can see them, although there is a fine scene where John Diehl describes addicts as being so close to death themselves that they are sitting on a fence, able to look down on life on one side and the dead on the other at the same time.