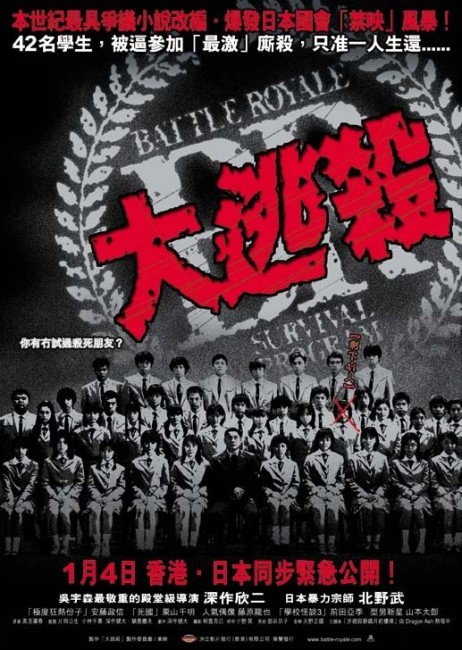 In the near future, Japan has fallen into a state of anarchy and pupils are refusing to go to school. To deal with this, the state has instituted the Battle Royale Act. The 9th Grade class from Zenjutsi High School goes on a field trip only to be gassed unconscious in the bus. They come around on an island where the principal Kitano informs them that they have been placed in the Battle Royale – a competition where each is given a different weapon and they must kill one another until only one of them is left alive. As the teens start massacring each other, two young lovers Shuya and Noriko try to stay alive and decide what will happen if only one of them is left.

Battle Royale came out in December 2000 amid much controversy. By pure coincidence it arrived around the same time as the first season of Survivor (2000– ) and the subsequent mania for so-called ‘reality tv’. Battle Royale seemed an uncanny escalation of the concept of Survivor – taking the logical step from voting people off the island in an elimination round to just eliminating them.

Battle Royale was directed by Kinji Fukasaku. A long-time contributor to Japanese pulp cinema, Kinji Fukasaku has a career that has stretched way back to the 1960s and has ventured through such genres as the samurai film, a great many Yakuza films, the Japanese segments of Tora! Tora! Tora! (1970) and occasional genre forays such as the classically bad kaiju eiga The Green Slime (1968), the space opera Message from Space (1978), the end of the world movie Virus (1980) and the kaidan eiga Crest of Betrayal (1994). Battle Royale was Kinji Fukasaku’s second-to-last film, made at the age of 70, and written by his son Kenta. He made one further film, this film’s sequel, before dying in early 2003.

Kinji Fukasaku is primarily a pulp director. For all the censorship battle that it provoked in some countries when it came out, Battle Royale is intended as no more than a comic book. Fukasaku is not is interested in sociological messages and expends a minimum of explanation on setting up the background of the future before getting to the main action. He has a good deal of fun with the violence with some amusing images of schoolgirls wiping each other out with Uzi’s or slitting each other’s necks with scythes. The film comes littered with these ultra-violent pop-up images – they are the film’s raison d’etre.

There is an intermittently lurking sense of black humour. This is never more apparent than when Beat Takeshi is on screen, he proving to be the scene-stealer of the show with his deadpan performance that includes some hilarious scenes delivering speeches to the classroom, impaling knives into people’s heads when they disagree with him and the wonderfully droll ending where he gets up from the death scene to take an abusive cellphone call from his daughter.

The film falls apart in the last few minutes with a few too many loose ends – we are not sure why Beat Takeshi lets the soldiers go without declaring a winner, how the others survive the automatic destruction, or about Beat’s peculiar attachment to Noriko, which comes suddenly out of nowhere.

Moreover, for all the entertaining ultra-violence, Battle Royale is an innocent and pure-hearted film. It is a film that ultimately believes in tradition – the school kids rarely even change out of their school uniforms, for instance. You might contrast it with that other epic cult film of Japanese anti-institutional ultra-violence, Female Convict Scorpion: Jailhouse 41 (1972), which joyfully celebrated its heroine’s anti-authoritarian anarchy and backed the killings with a gung ho relish. Battle Royale by contrast sits back with more conservative regard and sees the current youth of Japan as wayward and fantasizes of a situation where the brattish and anarchic can eliminate themselves, allowing the pure at heart to survive. One film celebrates anti-authoritarian defiance; the other celebrates an almost maudlin return to tradition.

The disappointing sequel was Battle Royale II: Requiem (2003). Kinji Fukasaku started directing by died part way through production, whereupon his son Kenta took over and finished the film. An English-language remake has been announced for sometimes in the 2010s. It has also been mentioned as a strong influence on the English-language hit of The Hunger Games (2012).