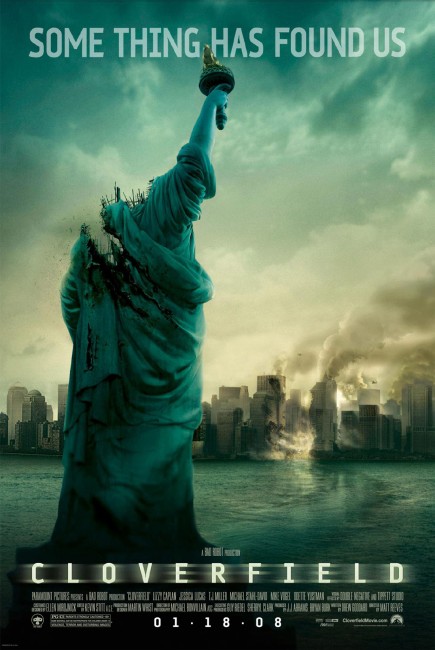 A group of friends gather in downtown Manhattan to hold a surprise party for Rob Hawkins who is about to depart to take up a vice presidency in Japan. Hud is given the job of recording everything on a camcorder. As gossip spreads around the room that Rob and Beth McIntyre were sleeping together, there comes sudden news that a tanker has overturned in the harbour. As they rush onto the roof to see what is going on, there is a massive explosion. The head of the Statue of Liberty comes crashing past on the street. Next, a vast monster is seen smashing buildings aside. Rob and a handful of others try to survive amidst the mass devastation as the military cordon the area off, evacuate people and try to fight back against the monster. Rob takes the others on a dangerous journey across town to rescue Beth from where she is trapped injured inside her apartment building.

Abrams was inspired by the Japanese Godzilla films, deciding he wanted to create an American monster movie. (The film’s central severed Statue of Liberty head scene was purportedly inspired by the poster art for Escape from New York (1981), depicting the statue’s head fallen in the streets, even though such a scene does not appear in that film). Director Matt Reeves was a childhood friend of Abrams and used to make Super 8 films together with him. Reeves and writer Drew Goddard are regulars from various Abrams’ tv series. The cast are deliberately all unknowns.

Cloverfield comes with full marks for the originality of its marketing scheme. The studio and production team decided on telling audiences almost nothing about the film itself and relied on the fascination this caused and word of mouth alone. This is something that worked for The Blair Witch Project (1999), to which Cloverfield has a great many similarities. All that we were given beforehand was a trailer, which was initially released with Transformers (2007), showing the handicam-shot scenes of the explosion in the harbour and head of the Statue of Liberty coming crashing down in the street. The trailer built considerable intrigue by not even giving the name of the film, just saying it was from producer J.J. Abrams. (As a result, for some time after, theatrical schedulessimply listed the release date for Cloverfield and called it ‘Untitled J.J. Abrams Project’). An absolute pall of secrecy was maintained about even the most vague plot details – it was not, for example, right up until near the film’s release that one was able to determine that Cloverfield was a monster movie. Eventually there was a poster with only the name of the film and a picture of the Statue of Liberty with its head missing. The most amusing gimmick was the creation of the various promotional websites – one for the Slusho soft drink that appears throughout the film, others for various drilling and environmental protest sites that go into a good deal of ancillary information before dropping suggestions about some mysterious event. All of this created a huge anticipation for the film.

The problem with a film that comes with as much advance hype as Cloverfield is that such can end in disappointment. Sometimes it ends in a Blair Witch Project. Equally, several muchly anticipated efforts in recent years have proven to be notorious underperformers on delivery like Snakes on a Plane (2006), another film with a perfect internet word of mouth campaign, and Grindhouse (2007), the latter of which underperformed so badly that it was not even seen in its full version outside of the US – see Death Proof (2007) and Planet Terror (2007).

Sitting down to watch Cloverfield is bewildering. One knows next to nothing about the film before going into the theatre. It soon becomes apparent that what we are seeing is a monster movie that has been shot in what in the next couple of years would become known as Found Footage style with handheld camerawork that has been designed to mimic a camcorder kept on throughout the action. The Blair Witch Project influence is more than clear on Cloverfield – there is even an identical scene with the hero making a tearful goodbye to the camera at the end. (Although, both Blair Witch and Cloverfield have their roots in the Dogme 95 movement – more than anything, Cloverfield looks like Dogme founder Lars von Trier’s Breaking the Waves (1996), which was shot in 70mm with the same sort of handheld and jerky photography). Around exactly the same time, George Romero also made Diary of the Dead (2007), one of his zombie films, all in a mockumentary style, while there was also the popular success of the Spanish zombie mockumentary [Rec] (2007). This was just before the Found Footage theme took off in a massive way following the success of Paranormal Activity (2007) in general release in 2009.

The Found Footage format results in some clever visual set-ups. When you consider that the raw jerky handheld camerawork has also been combined with highly convincing digital effects, the logistics of the exercise become extremely clever. Director Matt Reeves has some sophisticated things happening within shots, like the opening scenes where he manages to tell us all we need to know about the various characters – Rob and Beth’s affair, Hud’s desire for Marlena – in the midst of a party scene with various people recording seemingly off-the-cuff goodbye messages.

The cleverness and choreography of some of the shots is undeniable but I still ended up disappointed by Cloverfield. The problem with the film is that the publicity campaign and secrecy has built up a massive expectation. The concept of a monster movie presented as a home movie is a novelty that stays with one for a time but when one realises that this is all that the film consists of, it starts to seem like a one-trick gimmick. The problem is that there is not much to Cloverfield beyond the stylistic approach and a clever marketing strategy.

Most of all, there is no explanation of what the monster is or where it comes from and especially what the spider-like creatures attached to it are. Lizzy Caplan starts to mutate at one point – and, if the brief scene seen in silhouette gives any indication, is doing an Alien (1979) chestburster of sorts – but what is happening here is barely even dwelt on. Outside of the verite camerawork, all that Cloverfield does is wheel out the cliches of the monster movie – mass destruction, evacuations of the civilian populace, drastic military solutions, the protagonists racing against a deadline, creatures pursuing people in dark places, infection and mutation. Take away the hype and all that we would have would be (at least on a plot level) an unexceptional monster movie that never bothers to explain anything about its menace.

If anything, what Cloverfield kept reminding me off was the much disliked American remake of Godzilla (1998), which had almost identical scenes of a giant monster smashing its way through the streets of Manhattan. The comparison to Godzilla does highlight some interesting things about Cloverfield. Godzilla presented the mass destruction of New York City for our enjoyment but never considered the emotional cost to the people on the streets below. By the time of Cloverfield, New York has undergone the trauma of 9/11. Godzilla could be the same film as Cloverfield but where the focus is on the spectacle and military’s attempts to bring the creature down; Cloverfield by contrast does not concern itself too much with showing the monster and focuses on the confusion and emotionally shattered survivors.

The other post 9/11 films that one could compare Cloverfield to are War of the Worlds (2005) and I Am Legend (2007). All of these are monster/mass destruction movies that are trying to cope with the post-9/11 shock. In War of the Worlds, Spielberg focused on one man’s fight to be reunited with his family, while I Am Legend had the bizarre vision that the sacrifice of one man’s life and his blood would save and bring the world back together (an arguably muted Christian allegory). Cloverfield has the same theme as War of the Worlds of one man trying to reunite with his loved one, but arrives at an extraordinarily bleak ending. In the face of mass destruction, it says, there is no hope – not in trying to find your family, not in sacrifice and redemption of the world, nothing at all, as the camera fades to black.

10 Cloverfield Lane (2016) and The Cloverfield Paradox (2018) are sequels, although neither film is connected other than the general theme of people in the midst of a catastrophe and some of the fictional background brand names. Cloverfield was parodied in Disaster Movie (2008).