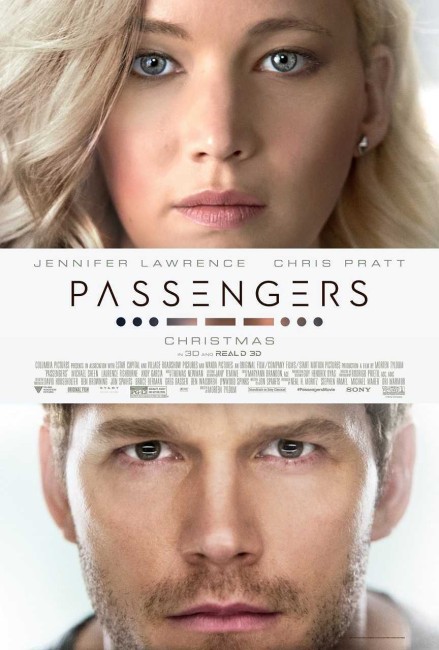 The spaceship Avalon is in the midst of a 120-year journey to set up a colony on the planet Homestead II. Aboard, there are 5000 passengers and 255 crew asleep in cryogenic pods and everything during the journey is automated. After the ship is struck by debris while passing through an asteroid field, mechanic Jim Preston is woken from hibernation. Jim is puzzled to find that he is all alone on the ship and it is only thirty years into the voyage with ninety more to go. He is unable to wake the command crew but equally is unable to reactivate his pod and go back to sleep. With only the android bartender Arthur for company, his sanity slowly starts to slip away. He then becomes captivated by Aurora Lane, a passenger in one of the hibernation pods. He debates about whether he should revive her to be his companion, knowing that if he does so, she will be trapped and unable to complete the voyage. He makes the decision to do so but lets her believe that her revival was another accident. They soon come together and romance sparkles. However, when Arthur inadvertently spills the truth to Aurora, this causes a severe split between them. At the same time, they must deal with the fact that the ship has been severely damaged and crucial systems are now failing.

Passengers – not related or to be confused with the earlier deathdream film Passengers (2008) – is the fifth film from Norwegian director Morten Tyldum. Tyldum made several films in the Norwegian language before having a breakout hit with Headhunters (2011). This led to his English-language debut with the Alan Turing biopic The Imitation Game (2014) with Benedict Cumberbatch, which had both Cumberbatch and Tyldum nominated for Academy Awards for Best Actor and Best Director. Passengers is Tyldum’s follow-up to that. Intriguingly, Tyldum has next announced an adaptation of the William Gibson novel Pattern Recognition (2003).

Passengers also represents the occasion when Jon Spaihts finally reveals he is a screenwriter worth paying attention to after negligible genre entries such as The Darkest Hour (2011), Prometheus (2012) and The Mummy (2017) to his name. To his credit, Spaihts did show promise with Doctor Strange (2016) released a month before Passengers, although he was only one of three credited writers there, and subsequently went on to write Denis Villeneuve’s Dune: Part One (2021). Passengers apparently made it onto the Hollywood Blacklist of unproduced scripts in 2007 and has had an impressive range of talent attached including David Fincher slated at one point to direct it and Keanu Reeves to play the Chris Pratt role opposite touted names like Emily Blunt, Rachel McAdams and Reese Witherspoon.

I welcomed Passengers as a solid conceptual science-fiction work – one based on a What if scenario and the development of its logical implications as opposed to a film where the science-fiction element serves as no more than the basis for an action film or a thriller. I liked Passengers a good deal for the fact that it took a solid concept – “What if a man wakes up thirty years into a 120 year generation ship voyage?” – and allows everything to proceed from there.

Cryogenic suspension has been used in films before. Frequently it is used as no more than a plotting shortcut to get around the scientific realities of space travel without the need for the introduction of warp drives as in Planet of the Apes (1968), 2001: A Space Odyssey (1968), Alien (1979), Pitch Black (2000), Supernova (2000) and Interstellar (2014). In some films like Planet of the Apes, Genesis II (1973), Buck Rogers in the 25th Century (1979) and Demolition Man (1993), it becomes a shortcut to adventure in other eras; in other films like Sleeper (1973), Late for Dinner (1991), Forever Young (1992), Austin Powers, International Man of Mystery (1997) and Idiocracy (2006), it is a basis of time travel stories that place a sleeper into a radically changed present/future world. Star Trek‘s Space Seed (1967), the Blake’s 7 episode Time Squad (1978), Ice Soldiers (2013) or the various adventures of Captain America, also feature criminals/soldiers from the past awoken in the present. That however is the only use that cryogenics has been put to on the big screen. The sole film one can think of where the cryogenic process became a central element of the plot rather than just a doorway to adventure was Air (2015).

Passengers is a strong character-based film, one where even the romantic element becomes a convincing part of the narrative. The backbone of the film is the moral question – “Does Chris Pratt have the right to wake Jennifer Lawrence up to become his companion?”, something that she even comes to regard as his having murdered her (or at least the potential she had for a future life). Everything logically plays out from there and commendably without the script conducting any last minute cop outs. With Passengers having earned over $100 million at the box-office of this writing, it is gratifying in an era that is continuing to prove that dumber sells that a good solid conceptual science-fiction work can have some traction with audiences.

What impressed the science geek in me was the effort the film makes to make the ship look convincing. It is wonderful little pieces like the corridor where the level of the floor curves upwards (as you would get for any ship that has a rotating gravity system). One of the most impressive scenes is the one where Jennifer Lawrence is in the ship’s swimming pool as the gravity goes off and is caught in a giant bubble of water that floats up into the air before being battered by oncoming waves bouncing off the sides of the room.

This is a film where you have the pleasure of knowing that the filmmakers and technical design team took the time to make the technology look credible, like it could actually work – everything from the holo-manuals, the maintenance robots, the interactive ship guide kiosks to the breakfast system where Chris Pratt is forced to spend a year eating processed blocks because he lacks the paygrade for the deluxe breakfast.

More than that, the film is a production designer’s dream – beautiful hallways stretching out around the ship, concourse decks, a cafeteria designed for hundreds, supply decks. One of the most dazzling of these is the exquisitely retro-designed bar tended by the android Michael Sheen. Much of the film consists of Chris Pratt wandering alone and slowly mentally decaying and during the latter sections the sparks that fly between he and Jennifer Lawrence. The beauty the film holds comes in watching this play out amid the stunning monument to technology arranged around them and the sense of their lives dwarfed by it.

The film is notable for stripping everything away to a cast of only four speaking parts (a couple more if you want to include the various holograms) – Andy Garcia is fifth billed, for instance, and makes an unspeaking appearance that consists of only a single shot at the very end. Chris Pratt and Jennifer Lawrence make an engaging on-screen pair. He has emerged in the last couple of years via high-profile roles in films like Guardians of the Galaxy (2014) and Jurassic World (2015) where he has developed an effortless charisma as a regular guy that you automatically engage with. This is a role where a different actor could easily have pushed the central emotional choice he must make over into something creepy and it is to Pratt’s commendation that we stay with him the entire way.

Jennifer Lawrence has emerged as a major talent in the last few years. It has to be said that the part of Aurora is not one that needed an actress of her calibre but is undeniably one that gains a boost from having her there anyway. As the perfectly polite android bartender, Michael Sheen also proves a complete scene-stealer whenever he appears.

(Winner for Best Production Design, Nominee for Best Original Screenplay at this site’s Best of 2016 Awards)