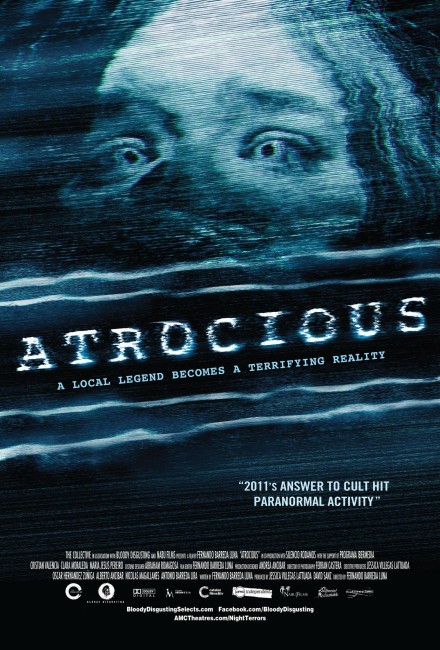 Teenager brother and sister Cristian and July accompany their parents on a holiday to their childhood vacation home near Sitges. They have borrowed video cameras and are determined to conduct an investigation into El Garraf Woods near the house where the ghost of a woman called Melinda is reputed to wander. As they defy parental orders not to venture into the maze in the woods beyond the gate, strange things begin to happen.

Atrocious switches you off from the opening scenes where it becomes apparent from the opening credits that it is a Spanish-made film but where those responsible for the English-language release have chosen to dub the film rather than offer up subtitles (a crude practice almost unheard of in the dvd era). It makes you feel like a 1970s Italian import where the voices actors offered no inflection or feeling, just the disinterested effort of people being paid to do a job. The two teens’ venture into the cellar, poking through some old junk comes with indifferently delivered exchanges like “Gives me the creeps?” “What’s this?” “I don’t know but it’s fucking scary,” something that is in no way backed up by anything we are seeing before us on the screen.

Atrocious ventures into one of the most overused themes in the Found Footage genre – the occult investigators conducting a tour of a supposedly haunted house. (Or at least, that is what the film wants to give you the impression it is doing – more on that below). The problem with this is that most of the theme has been milked out by Paranormal Activity and sequels and this offers nothing original. Not to mention that Cristian Valencia and Clara Moraleda are two of the most boring paranormal investigators in the history of the genre – they constantly whine and complain about nothing (something made even more so in the dull, disinterested dubbing) and have almost no expertise in the field other than the film’s concept “why don’t we wander through the supposedly haunted woods next to our holiday home with a video camera?”

Crucially, Atrocious is dull. More than half of the film consists of the two teenagers wandering through the house and the maze in the woods with a video camera looking for something. The film’s failing is that they never do until well past the one-hour point. There is nothing scary or even ambiguous that happens, just lots of wandering through a maze in the woods. To be fair to the film, this is consistent with its twist ending but a film that consists of more than an hour of misdirection in which almost nothing interesting happens is extremely trying to an audience’s patience. You are tempted to make a snide comment along the lines that it was nice of the film to chose a title that summed its own critical response up, however that kind of catty bitchery is beneath this site.

What does kill the film is an extremely confusing left field twist ending [PLOT SPOILERS] wherein it is revealed that there is nothing haunted in the woods and that the person behind the attacks would seem to be the kids’ mother (Chus Pereiro) who would appear (it is not entirely clear) to be a split-personalitied killer who has escaped from an asylum. This is a ridiculous twist for its own sake that does not make a whole lot of sense and is all the more infuriating for being one that is not led into and foreshadowed but a plot redirection that is only introduced in the film’s last five minutes.