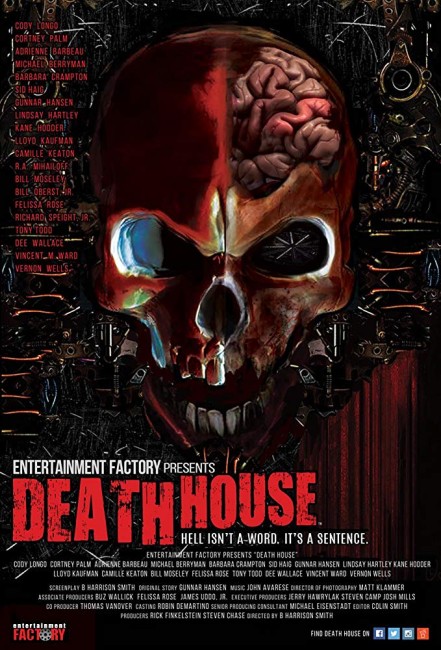 FBI agents Toria Boon and Jae Novak are sent to The Death House, a nine level underground facility that houses the most murderous and insane killers. They have been selected because of their unflinching dedication to the job in having killed innocents as part of their undercovers. The five worst of the inmates, known as The Evils, are housed in the ninth and deepest level. The agents are also shown a virtual reality system where the imprisoned killers are maintained in a simulation of their crimes. As the agents make their way through the levels of the facility, a power cut occurs. This causes all of the prisoners to be released whereupon they go on a rampage, slaughtering the staff. As Alois Seig takes charge and leads the inmates down to the ninth level to free The Evils, the agents and remaining scientists are forced to desperate survival measures.

Death House was billed as “a horror version of The Expendables (2010).” Where The Expendables and sequels were vehicles conceived around bringing together a team-up of action heroes of yesteryear, Death House has similarly been conceived around the idea of bringing together a bunch of horror actors principally from the 1970s and 80s. This is a winning idea and it a surprise nobody has thought of it before.

As far as one is able to ascertain, the film brings together:- Adrienne Barbeau, the former Mrs John Carpenter and lead actress in several of his films including The Fog (1980) and Escape from New York (1981); Kane Hodder who played Jason in four of the Friday the 13th films beginning with Friday the 13th Part VII: The New Blood (1988) and has made regular appearances since; Troma head Lloyd Kaufman; Bill Moseley, Chop Top from The Texas Chainsaw Massacre 2 (1986) and a genre regular since; Sid Haig, a horror regular whose career was revived in House of 1000 Corpses (2003); Tony Todd of Candyman (1992) fame and a genre regular since; Dee Wallace from The Howling (1980) and numerous films; Barbara Crampton from Re-Animator (1985) and numerous films; Scream Queen Debbie Rochon; Michael Berryman famous as Bluto in The Hills Have Eyes (1977); Camille Keaton from I Spit on Your Grave (1978); horror regular Bill Oberst, Jr; Vernon G. Wells, Wez from Mad Max 2 (1981) and a genre regular; R.A. Mihailoff who was Leatherface in Leatherface: Texas Chainsaw Massacre III (1990); while Screen Queen Tiffany Shepis and Felissa Rose who was the gender-confused Angela in the slasher film Sleepaway Camp (1983) turn up as doctors (the latter also acting as a producer). The story for the film was also conceived by Gunnar Hansen, the original Leatherface in The Texas Chain Saw Massacre (1974), who unfortunately died before the film was released.

The idea of a horror version of The Expendables is a great one. The unfortunate thing about Death House is that it has been placed in the hands of B. Harrison Smith, a director who had previously made Camp Dread (2014), Zombie Killers: Elephant’s Graveyard (2015) and the subsequent The Special (2020), as well as written the interesting The Fields (2011) and the incoherent 6 Degrees of Hell (2012). You keep thinking, if only the film had been by an even halfway competent director/writer, the results could have been quite something. As it is, we end up with a squandered opportunity.

I fully commend Smith for his networking skills in managing to persuade so many names with a genre history to come together. Unfortunately, the results are a mess. It often feels as though scenes were randomly shot based on the availability of actors. In some cases, especially when it comes to The Evils, they exist more as a set of faces that appear on displays or in flashbacks rather than all the actors ever being in the same room. The wraparound scenes with Tony Todd, the surgery room scenes with Lloyd Kaufman and the various virtual simulations with Sid Haig and Debbie Rochon all feel like they could have been shot for other films and grafted in. The scenes confronting the three lunatics who are convinced they are incarnations of Satan feel as though they belong to another movie as they never intersect with the main plot.

It is all slung together with a bunch of ideas that seem to collide but never really mix. The FBI agents are introduced to a virtual reality system but, aside from this allowing a few flashbacks to various killers, the VR system is entirely forgotten about in the latter half of the film. Even the reasons whereby the agents have been brought in are murky – something to do with being rewarded because they showed bravery in undercover operations that required them to kill innocents!.

In the latter half, we get a prison breakout, which turns the film into something more akin to The Incident/Asylum Breakout (2011) with a bunch of good guys having to survive in the midst of a horde of suddenly unleashed crazies after the power goes out. There are some scenes about people brought in off the streets to act as victims in scenarios that involves them being drugged and sometimes altered – Tony Todd from would appear to be a recruiter in the wraparound scenes – although it is not clear what the purpose of these is.

The plotting incoherence kills the film. Directorially, B. Harrison Smith does go for a certain intensity during the scenes of the prison breakout and where Kane Hodder leads the prisoners. Or in images when the fleeing party come across a room of imprisoned homeless all chewing on the gorily dismembered remains of other inmates. But the rest of the film is a disjointed mishmash.