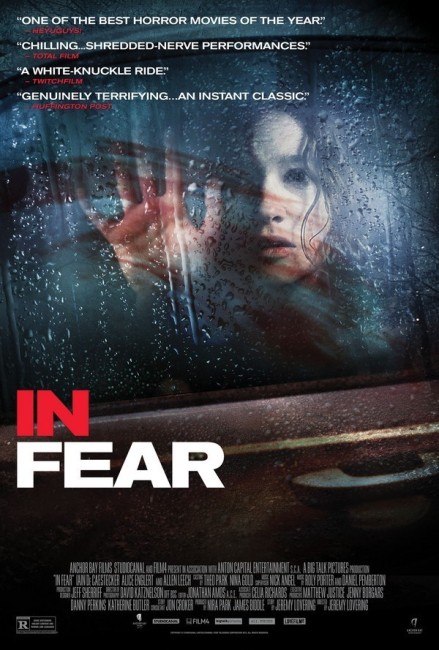 Tom asks Alice, a girl he has just met, on a date to a music festival in Ireland. On the drive there, Tom asks if she will spend the night in a hotel he has booked and she agrees. They set off to find the hotel, Kilairney House, but the signs on the narrow country road they must travel down are confusing and keep leading them in circles. As night comes, they find themselves hopelessly lost. As they try to work out what to do, they discover that someone is stalking them and playing sadistic pranks. These become increasingly more violent in nature.

In Fear is a British-made debut feature for Jeremy Lovering, a director who has emerged out of UK television, shooting tv movies and mini-series such as Killing Hitler (2003) and Miss Austen Regrets (2008), and numerous episodes of various tv series, including one of the cult hit Sherlock (2010– ). Despite the stated location of the Irish countryside, the film is shot in Devon and Cornwall in the south-west of mainland England.

Both In Fear and Jeremy Lovering were unknowns when I sat down to watch the film. It had received some good word of mouth in its rounds of various festivals. In soon turns out that it is a variant on the Backwoods Brutality film – a genre that was at its height during the 1970s with films such as Straw Dogs (1971), Deliverance (1972), The Last House on the Left (1972), The Texas Chain Saw Massacre (1974), The Hills Have Eyes (1977) and Day of the Woman/I Spit on Your Grave (1978), among others. These films usually centred around a group of city slickers wandering into the back country/woods where they ran afoul of murderous hicks.

The Backwoods Brutality genre underwent a revival during the 2000s after the remake of The Texas Chainsaw Massacre (2003) and a number of imitators. The British made several ventures into the Backwoods Brutality genre during this period with Broken (2006), Severance (2006), Wilderness (2006), The Cottage (2008) and Eden Lake (2008). In particular, what In Fear reminds of is some of the continental variations such as Them (2006) or the US-made The Strangers (2008), which both keep the agency tormenting the city slickers as something shadowy and unseen.

Starting with no particular expectation, I was soon amazed with what Jeremy Lovering was doing with In Fear. Everything in the build-up comes with a feeling of disquiet. The placement of camera angles is offsetting – from behind people’s backs, centred down by the car’s tire as it is driving, closeups on faces shot from low angles, even the way the scenery outside the car is filmed. These seem like ways of angling a camera lens that we have not seen before and a determination to offset any expectations that come with conventional horror/thriller cues. The film is beautifully photographed and has an excellent score that adds a wonderfully brooding soundscape.

The story has a very simple set-up – so simple it would appear that there is no actual screenplay credit, giving the impression that most of the film has been improvised The film is essentially a two-person drama and one that takes place inside a car for almost the entire running time, although a third character does enter the show later in the game.

The two lead characters are played by the increasingly rising name of Scottish-born actor Iain De Caestecker just before he became a regular and fan favourite on tv’s Agents of S.H.I.E.L.D. (2013-20), and Alice Englert, the daughter of Jane Campion, who proves herself to be a name of quite some promise.

All the effectiveness of the film resides in the brooding tension, the increasing sense of desperation and the fine interaction of the two actors. Jeremy Lovering keeps everything quiet but full of looming menace, leaving what is out there terrorising the couple with a shadowy indistinctness for the most part. This is Backwoods Brutality with a real difference. And one that makes me regard Jeremy Lovering as a highly promising new director.