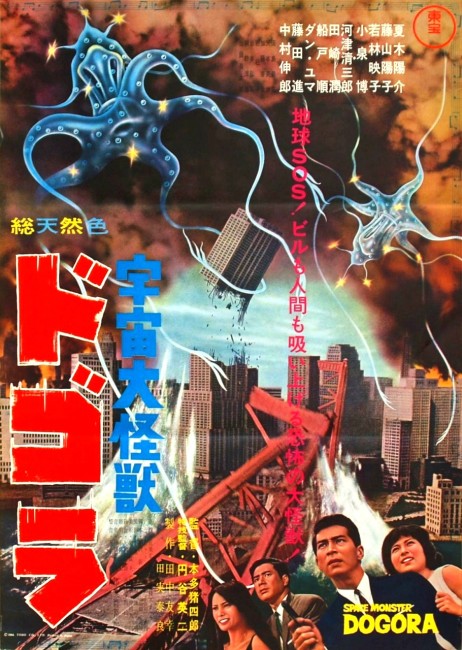 There are a spate of strange diamond thefts all over the world. In search of answers, Inspector Kommei goes to consult crystallographer Dr Munakata and is witness as a blue blob breaks into Munakata’s safe to take his diamonds. Kommei also becomes involved with Munakata’s assistant Masayo Kirino. The trail leads to underworld diamond broker Mark Jackson who reveals he is an international agent attempting to stop a gang of diamond thieves. As they investigate, they witness diamond shipments and piles of coal around the country being sucked up into the sky by a creature. It is determined that Dogora, as it is named, is a spaceborn cellular organism that has been mutated by radiation and needs carbon to feed upon.

Japanese director Ishiro Honda (1911-93)’s greatest claim to fame will always be that he was the man who created Godzilla in Godzilla/Godzilla, King of the Monsters (1954). Honda went on to make 51 films, most of them in the kaiju genre (see below for Ishiro Honda’s other films). From the late 1950s throughout the 1960s, in between assorted Godzilla sequels, Honda made a steady stream of other monster movies – Rodan the Flying Monster (1956), Varan the Unbelievable (1958), Mothra (1962) and Frankenstein Conquers the World (1966), along with assorted Godzilla sequels and monster team-ups – and space operas – The Mysterians (1957), Battle in Outer Space (1961) and Gorath (1962).

Dogora the Space Monster is one of Honda’s other monster movies and surprisingly one that has never been sequelised and/or merged into the Toho-verse and pitted against Godzilla. As with almost any Japanese monster movie of the era, it manages to wind in some reference to atomic radiation – although the atomic bomb is not mentioned, it is said at one point that the monster was a cellular lifeform that has been mutated by exposure to radiation.

Honda soon wheels out the familiar things he did with almost any of his monster movies – the aging scientist and his cute assistant/romantic lead; the military going into action to tackle the threat accompanied by montages of vehicles carrying heavy machinery and weapons heading off in convoy; the batteries of rocket launchers and missiles all lined up – none of which prove to be of avail against the monster; scenes of the city being destroyed by the monster and the citizenry fleeing through the streets.

The main problem with Dogora as a monster is that it is not a distinct threat. As opposed to every other Japanese monster movie, it is not some kind of giant beast rampaging across the countryside but an inky cloud in the sky. It looks exactly like someone had created the effects by injecting oil colours into a tank of water. At most, we get to see glowing tentacles coming down and tearing up a bridge (a reasonable effects sequence) and in the earlier scenes a blue glowing blob shape. Certainly, the various effects scenes are accomplished for the era and there is no complaints on that front.

Ishiro Honda’s earthbound non-monster films of this period – The H-Man (1958), The Human Vapor (1960) – often fall back on crime film plots and seem an odd hybrid of superheroic mutation film and mundane crime drama. That is certainly the case with Dogora where the appearances of the monster are interspersed with a plot involving the initial assumption by the police that they are dealing with a spate of diamond robberies and the various attempts to apprehend a gang of diamond thieves. In the midst of this we have the character of the Japanese-speaking gaijin Mark Jackson (Dan Yuma – in reality, Robert Dunham, a Japanese-speaking American businessman who found employ in various Japanese films of this era) who initially seems to be one of the criminals but is revealed to be some type of international agent.

Beyond creating spectacular special effects spectacle, Ishiro Honda was a dull, prosaic director who had no interest in the human element in his films. A redeeming factor of his films was always their colour and often an element of the bizarre. Here we get the exceedingly strange (and never explained) image early on in the show of people coming across a man floating through the streets while lying on his side. There is also the strangeness of the scenes where Dogora attacks a coal processing plant and we see clouds of coal floating up into the sky, and later of trucks containing diamond supplies being sucked up.