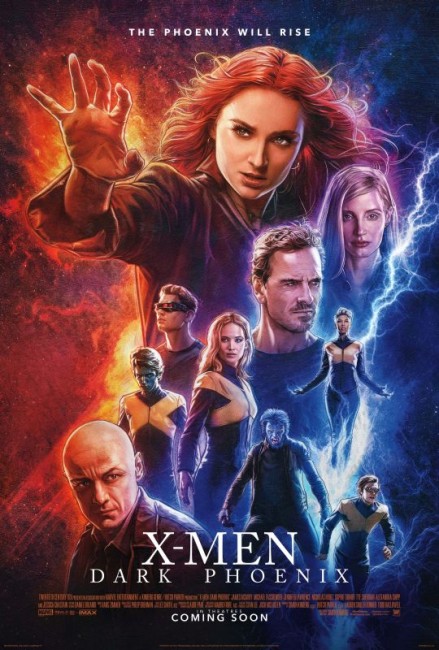 In 1975, eight year-old Jean Grey argues with her parents about the radio station that is playing as they drive. This causes a sudden eruption of her powers that overturns the car, killing her parents. In the aftermath, she is taken in by Professor Charles Xavier. In 1992, Jean accompanies a team of X-Men into orbit to the rescue of a space shuttle that is being threatened by solar flares. Jean is teleported into the shuttle where she uses her abilities to stop it falling apart and is narrowly rescued as it explodes. Afterwards, Raven angrily turns on Professor Xavier for putting Jean in danger. Tests then reveal that Jean’s powers are growing following the explosion. Able to access her memories, she finds that Professor Xavier blanked what happened as a child from her and that her father is still alive. She goes to confront him. The other X-Men follow to bring her back but this ends in a massive fight during which Jean kills Raven. Jean flees and seeks refuge at Magneto’s compound. The US military arrive to stop her and she uses her newfound powers to drive them off. She is then found by aliens who reveal that she is inhabited by a powerful energy being that was responsible for creating all life on Earth and is equally capable of destroying it. As the aliens seek to take the Phoenix energy from her, Jean is hunted on all sides by X-Men, Magneto and the military who have ordered a new crackdown on mutants.

This was the tenth of the X-Men films. The series had begun with Bryan Singer’s X-Men (2000), which was made back at a time when the Marvel Cinematic Universe did not exist. Singer followed up with X2 (2003) and then departed the franchise whereupon it fell in on itself with the next entry, Brett Ratner’s X-Men: The Last Stand (2006). With the salaries of the stars accelerating due to their increased profile, 20th Century Fox tried alternative options such as solo ventures like X-Men Origins: Wolverine (2009), The Wolverine (2003) and Logan (2017) and then a reboot series that recast the series with younger faces beginning with X: First Class (2011), followed by X-Men: Days of Future Past (2014), X-Men: Apocalypse (2016), Dark Phoenix here and the subsequent The New Mutants (2020). That’s not mentioning other spinoffs like Deadpool (2016), Deadpool 2 (2018) and the tv series’ Legion (2017-9) and The Gifted (2017-9).

Dark Phoenix and The New Mutants spelt the end of the X-Men films – as we know them at least. It came out three months after 20th Century Fox, the series copyright holder, merged with Disney who are partnered with Marvel Studios. This of course means that film rights to the X-Men revert back to Marvel and will almost certainly merge with the MCU at some future point.

For right or wrong, Dark Phoenix was regarded as a troubled production. Reshoots were ordered following early test screenings and dragged out for a year. The film was then caught up in release schedule shuffling due to the 20th Century Fox/Disney merger. When released, the film earned a mere $65 million domestically, which is not immodest overall but is nearly $100 million less than all the other films, making it the lowest grossing entry of the X-Men series (until The New Mutants which came out amid the 2020 theatrical closures due to the Covid pandemic) and a substantial loss for the studio.

X-Men: Dark Phoenix comes from Simon Kinberg had wrote the scripts for The Last Stand, Days of Future Past and Apocalypse, as well as produced everything in the X-Men series from First Class onwards, including the Deadpool films and Logan. Kinberg has also written Mr. and Mrs. Smith (2005), xXx: State of the Union (2005), Jumper (2008), Sherlock Holmes (2009) and Fantastic Four (2015), plus developed the revival of The Twilight Zone (2019- ). As well as that, he has also acted as producer on a number of high-profile films including most of the abovelisted and Abraham Lincoln, Vampire Hunter (2012), Elysium (2013), Star Wars: Rebels (2014-8), Chappie (2015), The Martian (2015) and Murder on the Orient Express (2017).

Kinberg adapts the storyline known as The Dark Phoenix Saga that ran throughout Marvel Comics for most of 1980. The original storyline is much more elaborate than the one here, involving Jean Grey being possessed by the Phoenix entity, battling the villain Mastermind, flashing back to her past lives as a member of the Hellfire Club, The Dark Phoenix running amok and becoming so powerful that she drains entire stars before the X-Men and assorted intergalactic races combine forces to stop her. The film version has stripped this down to a bare bones telling. Simon Kinberg had previously adapted the Dark Phoenix Saga storyline in X-Men: The Last Stand.

I must say I was disappointed in Dark Phoenix. All of the advance publicity had called it something bad, while the film sitting on the shelf had led to a good deal of negative rumour before it even opened. The surprise is the finished film is nowhere near as bad as you assume. It’s not a great film but it sits above something like X-Men: The Last Stand and around the level of other mid-range entries like X-Men: Apocalypse and X-Men Origins: Wolverine. There is no specific aspect of the film I can put a finger on and go “that was soooooo bad.”

As always in the X-Men films, the show rides on the effects sequences. The sequence with the X-Men keeping the shuttle from falling apart is the first but actually the weakest of the sequences in the film. It even fails to make the almost death of Jean Grey into something tragic. That said, the film improves by leaps and bounds with each subsequent sequence – the scene with Jean Grey defeating the X-Men outside her father’s house; the scene where she turns the helicopters back on the US military in Magneto’s compound; and the New York street battle, culminating with Michael Fassbender bursting into the foyer of the apartment at the head of a subway carriage he has levitated up through the pavement. The standout sequence though is the one where the aliens make an assault on the train and are fought off by various mutants – a sequence that easily stands up there with the best superheroic action scenes directed by Bryan Singer in his entries.

I don’t think the Dark Phoenix storyline comes out that interestingly – concepts like the force that created life in the universe gets thrown around too casually and all it seems to amount to is lots of energy blasts and coloured lights. There is an interesting idea lurking inside the script that is about questioning the character of Professor Xavier – whether he is interested in self-glorification at the cost of others’ lives and the justification of altering someone’s memories. However, I don’t think it gets a very substantial treatment – it gets abruptly thrown in after the mission seemingly to give Jennifer Lawrence a big scene and then is shuffled off to the side at the end when Professor Xavier abruptly quits.

More than anything, you get the impression that the film was regarded as an opportunity for many of those involved to bid farewell to the series. Jennifer Lawrence’s Mystique is killed off, presumably because Lawrence is now an A-list name and has grown out of constantly being outfitted in a blue makeup. And then there is the end – where you cannot help but be reminded of the killing off of Professor Xavier in The Last Stand – which seems there as James McAvoy’s opportunity to bid farewell to the series. In both cases, it is the characters getting fates that run quite contrary to their comic-book counterparts.

This also adds to the frustratingly convoluted and frequently contradictory continuity of the X-Men films. Dark Phoenix takes place in 1992 and makes no real sense in relation to the other X-Men films, which all have Mystique and Jean Grey alive and Professor Xavier still in charge by 2000 and into the future that we see in Days of Future Past. It seems a series interested only in creating each adventure as a self-contained entity that often blatantly ignores what has gone before, the upshot of which is that audiences have ceased to care by this point.