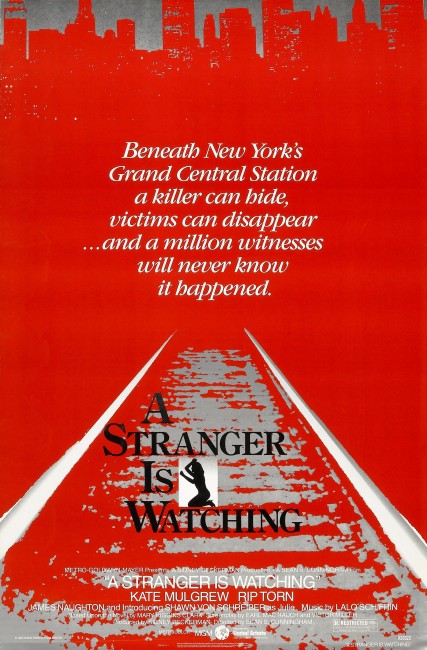 A delivery boy is about to be executed for the rape and murder of Brenda Peterson. The identification was made by Brenda’s 10-year-old daughter Julie who witnessed the killing. Julie and her father’s girlfriend, tv journalist Sharon Martin, are then abducted by Artie Taggert who takes them to his lair in the disused tunnels beneath Grand Central Station. Artie leaves a tape for Julie’s father, saying that he wants $182,000 ransom. As Julie and Sharon try to escape, they discover Artie was really the one who killed Brenda.

Sean S. Cunningham had had a huge success with the B-budget sleeper Friday the 13th (1980). The next film he made was this kidnap thriller. It was not a great success, as with most of Cunningham’s films post-Friday films – The New Kids/Striking Back (1985), Deepstar Six (1989), the frat comedy film Springbreak (1983) and the alien invasion film Terminal Invasion (2002). Indeed, the greatest success Sean S. Cunningham has had subsequently is with the House films, beginning with beginning with House (1986), which he only produced. Why Cunningham did not consolidate the success of Friday into something greater is a mystery. It is almost as though, and as all his subsequent directorial efforts show, he seems incapable of stretching beyond obvious B-budget hackwork, even though the success provided by Friday the 13th must have granted him the opportunity for much larger budgets.

A Stranger is Watching is probably Sean S. Cunningham’s best film, the only one that shows him capable of something more. He still trades in many of his customary cheap shocks – Shawn von Schreiber screaming in the shower because of cold water, cats jumping out at people and so on. However, it is a stretch to call A Stranger is Watching a horror film. It has a borderline psycho but it is more of a kidnap drama and it was only the Cunningham name attached that caused it to be reviewed in the horror genre at the time.

The film is mostly routine. There is a reasonable degree of suspense during the scenes with Kate Mulgrew and Shawn von Schreiber trying to escape up the dumb-waiter and so on. If Cunningham had concentrated the film on the psychology of escape and imprisonment rather than wasting it on Rip Torn’s encounters with Chicano gangs and co-conspirators it would have been much better. The other worthwhile thing the film has going for it is Rip Torn’s ruthless and mean-spirited performance.

A Stranger is Watching is also notable as the film acting debut of Kate Mulgrew, later Captain Janeway on Star Trek: Voyager (1995-2001).