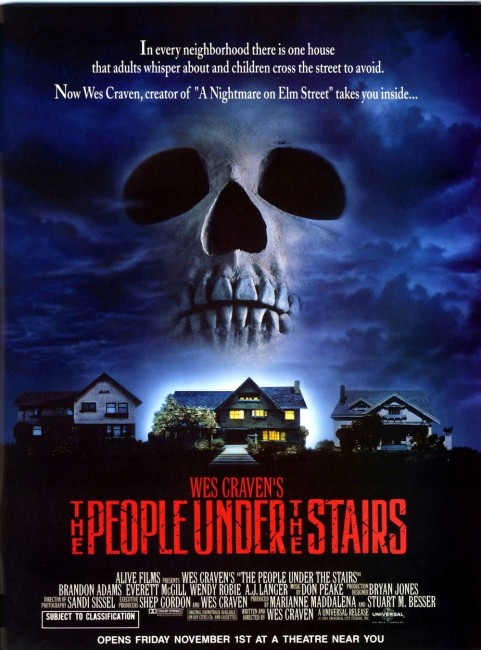 Impoverished and cancer-ridden Ruby Williams is about to be evicted from her ghetto apartment so that the landlords can raze the building for redevelopment. Her friend Leroy comes up with the idea of using her young son Poindexter or Fool to sneak into the landlords’ house and steal their valuable collection of gold coins. However, the robbery goes wrong and Fool is left trapped inside the landlords’ labyrinthine, trap-laden house. There he finds a number of other missing neighbourhood children that have been abducted by the landlords in an attempt to create a perfect family but have then been banished to the cellars when they fail to meet up to expectation.

The People Under the Stairs is one of the less remembered film of Wes Craven, even though it enjoyed reasonable box-office during its day. Craven was riding high on the success of A Nightmare on Elm Street (1984), which by this point had spawned a series of sequels that had transformed the horror genre. Craven moved onto a string of other films, including Deadly Friend (1986), The Serpent and the Rainbow (1988) and Shocker (1989) but didn’t have another major success until a few years later with Scream (1996).

The film was loosely based on an incident that Wes Craven read about in a newspaper. It emerges as a unique sociological horror film. Indeed, The People Under the Stairs could almost be described as The Stepfather (1987) – with its image of a middle-class man slaughtering families that fail to meet his standards – remade as an Old Dark House movie.

In contrast to other contemporary psycho-thrillers of the 1990s like Fatal Attraction (1987), Pacific Heights (1990) and Falling Down (1993), which were all about defending middle-class values, here Wes Craven paints middle-class values as claustrophobic and parasitic and on the side of good upholds ghetto values. Indeed, The People Under the Stairs is so sympathetic to the poor that it even accepts breaking the law in terms of robbing from the rich as a justifiable action on the part of the downtrodden and places the blame for their situation squarely on parasitic middle-class capitalists.

It is a striking inversion of most of the subtext of 1990s psycho-thrillers like the abovementioned, which saw middle-class values as in need of defending themselves against people outside their door ie. the forces of feminism, the poor and minority racial groups. With intriguing symbolism, the film climaxes with the destruction of the house and the raining of money down on the poor neighbourhood.

Wes Craven takes to the horror with a startling intensity. The house is designed as a gloomily claustrophobic labyrinth that has a rubber reality where appearances are never what they seem and anything can collapse into something altogether different – stairs can become slides, windows armoured security screens and walls, floors, even kitchen flues prove to be hiding places – at a moment’s notice. Craven offers a number of genuinely eerie scenes creeping through the cellar, of voices spookily howling from inside the wall and hair-raising pursuits by dogs.

Everett McGill and Wendy Robie, who were also paired as another weird screen couple in tv’s Twin Peaks (1990-1), give out of this world performances. There is nothing in the film more outlandish than the image of Everett McGill (who most of the time only communicates in grunts) running through the house clad in head-to-toe studded black leather bondage gear, wielding a shotgun and roaring incoherently.