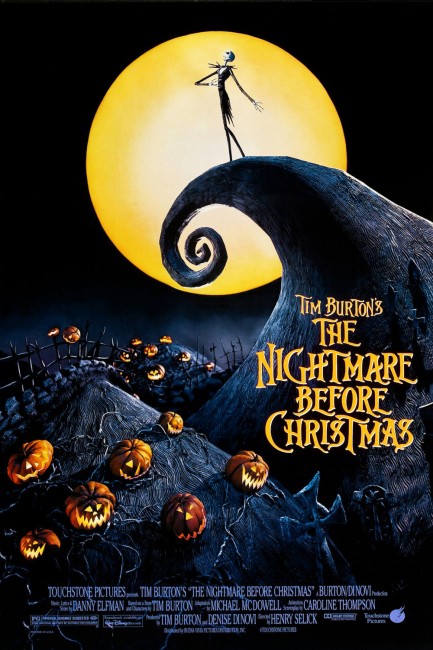 In Halloween Town, Jack Skellington, the pumpkin king, succeeds in overseeing another highly successful Halloween. However, Jack is tired of receiving these accolades and wants more. In the woods, he discovers a door in a tree and falls through into Christmas Land. He returns to Halloween Town all enthused about Christmas and marshals the creepy-crawly denizens of Halloween Town into building toys and skeletal reindeer. They then abduct Santa so that Jack can take his place on Christmas Eve. Meanwhile, Jack’s girlfriend Sally has a precognitive dream, one that Jack seems oblivious to, that Christmas will end in disaster this year.

This dark and brilliant film is one of the few masterpieces to come out of the muchly debased sub-genre of children’s filmmaking in recent years. Despite unanimously glowing reviews, The Nightmare Before Christmas did only moderate box-office business Stateside when it came out, although has built up a considerable cult since (even being re-released in 3D in 2008). It is not hard to see why – as a children’s film that embraces the spirit of Halloween and has a gleefully dark tone, it is guaranteed to offput any parent that insists their child can only watch positive feelgood Christmas fables. If the tone isn’t enough, then a scene where Santa Claus is tied up and tortured surely is.

To make a full-length stop-motion animated feature has been a long-time dream of Tim Burton, director of live-action fare such as Beetlejuice (1988), Batman (1989), Edward Scissorhands (1990), Batman Returns (1992) and Ed Wood (1994). Tim Burton began his career as an animator at Disney and first branched out into filmmaking with the stop-motion animated short Vincent (1982) made in the same expressionistically contorted style as The Nightmare Before Christmas. Despite the publicity machine’s attempts to mislead us so, Tim Burton does not direct The Nightmare Before Christmas, however his distinctive style hangs over and imprints itself on every frame of the film. From Vincent to the outlandish zebra-striped sandworms of Beetlejuice, Burton has a liking for this eccentrically twisted, cartoon Expressionist style – it is as though Charles Addams’s original Addams Family characters had strayed into the world of The Cabinet of Dr Caligari (1919).

The Nightmare Before Christmas is certainly the nearest anybody has coming to putting the peculiarly morbid world of Charles Addams on screen in toto. There are some surprisingly dark and scary moments, particularly during the unveiling of the Halloween Christmas presents – severed heads wrapped as presents, kids being pursued by malevolent ducks with painted, bleeding bullet holes and giant Christmas-tree devouring snakes. Like several other 1990s family films, particularly the two Addams Family films, The Addams Family (1991) and Addams Family Values (1993), The Nightmare Before Christmas willingly embraces what might be called anti-feelgood values where the scary, the perverse and the sadomasochistic are presented as normal and harmless.

Like all of Tim Burton’s work, The Nightmare Before Christmas has a clear affection for outsider characters. The film creates an appealingly woolly menagerie of supporting grotesqueries – from werewolves and vampires, even a fish-like variant of The Creature from the Black Lagoon, to walking bathtubs and skeletal reindeer, to Jack’s ghost dog Zero, a grotesque musical trio who play living accordions and cellos with living heads inside the soundboard, and a mad scientist who from time to time flips the hinged lid on his head back to scratch his brain.

The character of Jack Skellington (who has clearly been inspired by Jack Pumpkinhead in the Oz books) is presented with the flawed hubris of the character who only needs to realise his true position in life. The character the film seems to have the most regard for is the character of Sally – a sort of Cabbage Patch Bride of Frankenstein who is forever having to sew her own limbs back on.

The Nightmare Before Christmas never goes as far as the Addams Family films in seeing the gleeful and perverse anti-values as superior to staid middle-class values – it presents the few people we see in the trip into the outside world with an affectionately rounded softness – but rather sees, in a typically Burton-esque way, its eccentric offbeats as a group of vulnerable outsiders worthy of inclusion. It ends appropriately not with the triumph of anti-values but the self-realisation of its monsters and a cosy restoration of the status quo.

On its technical side, The Nightmare Before Christmas is a staggering achievement. If one considers the fact that it has been shot one frame at a time, it is even more amazing. This is only eclipsed by the astounding job of design that has gone into the creation of Halloween Town. From the wonderfully desolate world of the graveyard with its skeletal trees and black-and-white slate tombs to its curled-up loops of hills, its rickety dog-leg towers that look like upended stockings, to Oogie Boogie’s domain, which is like a Las Vegas ghost train ride in iridescent glow-in-the-dark colours, the film is a work of contorted genius.

The Nightmare Before Christmas announced animator Henry Selick as one of the major new talents to emerge in fantasy in the 1990s. Despite the universally positive reviews enjoyed by The Nightmare Before Christmas, Henry Selick has found difficulty mounting other projects. He next made the also Tim Burton-produced Roald Dahl adaptation James and the Giant Peach (1996), a well-worthwhile film that also failed to obtain the audience it richly deserved; the partly live/partly animated Monkeybone (2001), set in an afterlife of a cartoonist’s unconscious, which was a huge flop; and the adaptation of the Neil Gaiman novel Coraline (2009).