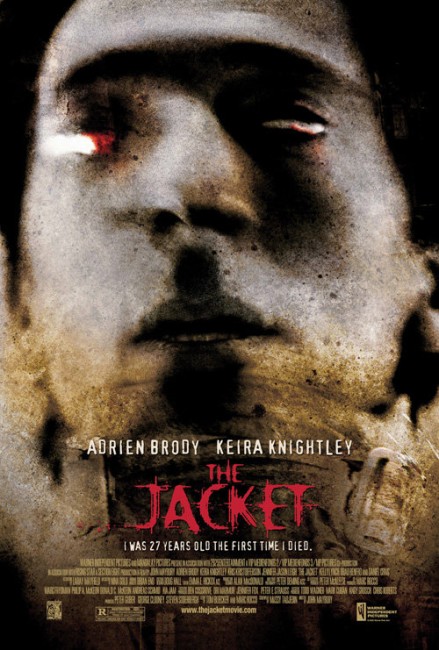 In 1991, in Iraq during the midst of the Gulf War, soldier Jack Starks is shot in the head but miraculously manages to survive despite being certified as dead. Back in Vermont twelve months later, Jack is walking through the snowy countryside when he comes across a young girl Jackie and her drunken mother whose vehicle has stalled and helps them fix it. He then hitches a ride, only for the driver to shoot a cop that pulls them over. Jack collapses by the roadside and his mind blanks everything out. He is tried for the murder but instead of being convicted is sentenced to the Alpine Grove psychiatric institution. There psychiatrist Thomas Becker prescribes a treatment where Jack is straitjacketed, drugged with psychotropic medication and then locked in a morgue drawer. Inside the drawer, Jack experiences terrifying hallucinations. He then finds that he can somehow physically travel forward through time to the year 2007. There he meets a girl who invites him home because he has nowhere to stay. He realises that she is the now adult Jackie. The two become lovers during his subsequent visits. However, she tells Jack that he died back in 1992, only several days after the point that he left from. He and Jackie go on a quest to find how he was killed.

The Jacket is a co-production from Section Eight, the company formed in 1999 by director Steven Sodebergh, the director of Erin Brockovich (2000) and Solaris (2002) and actor George Clooney. (The company’s name refers to the US military term for being considered mentally unfit for duty). The idea Soderbergh and Clooney had with Section Eight was to create an environment for filmmakers to work free from studio interference. Section Eight has so far produced Soderbergh’s Ocean’s Eleven (2001), Full Frontal (2002), Ocean’s Twelve (2004), Bubble (2006), The Good German (2006), Clooney’s first two directorial outings, Confessions of a Dangerous Mind (2002) and Good Night, and Good Luck (2005), and various other films including Todd Haynes’ Far from Heaven (2002), Christopher Nolan’s Insomnia (2002), Syriana (2005), Richard Linklater’s Philip K. Dick adaptation A Scanner Darkly (2006), the ghost story Wind Chill (2007) and Michael Clayton (2007), before it was closed down in 2006.

In the case of The Jacket, Clooney and Soderbergh took a chance on John Maybury, a British-born music video director whose previous feature-length film was Love is the Devil (1998), an incisively charged biopic of artist Francis Bacon, and would subsequently go onto the Dylan Thomas biopic The Edge of Love (2008).

At the outset, you are not sure what kind of film The Jacket is. The mixture of amnesia, mental illness and hallucination makes one think that they are settling into another of the Reality Bender films that have become popular in recent years. The reality disjunctions keep leading one to expect something on the order of another Open Your Eyes (1997) or The Machinist (2004). In particular, one is reminded of Jacob’s Ladder (1990) about the reality blurrings experienced by a Vietnam Vet (who had also died) and Campbell Scott’s Final (2001) about a man in a psychiatric institution who is certain that it is an illusion. The sensory deprivation drawer scenes take The Jacket back to films like The Mind Benders (1962), The Groundstar Conspiracy (1972), The Mind Snatchers (1972), Who? (1974) and Altered States (1980), while the suggestion of Gulf War (I) mind-bending experiments at the start remind of the recent remake of The Manchurian Candidate (2004).

The big disappointment about The Jacket is that the set-up concerning The Gulf War, the hero’s seeming death, his brain damage, memory blanks and conviction for a murder he cannot remember, are not what the film is about at all. It would, for example, be possible to construe a version of The Jacket that excised the Gulf War beginning and everything bar the meeting with the mother and daughter on the road and to tell the story with Adrien Brody as a standard psychiatric patient, which is what the film is actually about.

What eventually does emerge is not any kind of reality or identity bender film as The Jacket tends to suggest at the outset but a time travel film. In looking for a film to compare The Jacket to, one might look no further than Twelve Monkeys (1995). Indeed, The Jacket could almost be a mirror opposite of Twelve Monkeys. Where Twelve Monkeys had a time traveller come back from the future to the present and thought to be mad and locked up in a psychiatric institution, The Jacket has a man deemed mad and locked up in a psychiatric institution from where he contrives to travel into the future. In both films, the screenwriters construct a story around the man being drawn to a crucial memory in his past; both also feature scenes where the protagonist must crucially convince a woman psychologist of the truth of what he says by relaying foreknowledge of events from the future.

In its US release, The Jacket received a good many reviews that called it confusing and hard to follow. This is not the case at all and probably says more about critics and their unwillingness to go a certain way and forgive a film some things in service of the greater whole. In fact, The Jacket is far less complex in terms of what is going on than Twelve Monkeys, Open Your Eyes and most of the abovementioned. Certainly, in order for The Jacket to work, you do have to go with its dogleg turn from a beginning that eventually turns out to have little to do with the finished film and to accept its lack of any explanation for how Adrien Brody manages to physically time travel into the future while his body is still present in a morgue drawer. Eventually though, The Jacket does reach a modest effectiveness. The time travel twists and paradoxes are conducted with a certain cleverness and the film does reach a reasonably affecting end.

Adrien Brody is an actor that I have yet to fully warm to. Brody is a technically good character actor – see his physically emaciated performance in Roman Polanski’s The Pianist (2002) – but he seems entirely cold when it comes to radiating charisma and star leading man quality – see King Kong (2005). Brody does passably in The Jacket, as this is a role that requires him to simply be present rather than emote. Much more impressive are some of the actors surrounding him, the immensely talented Keira Knightley, the then up-and-coming Daniel Craig and the always interesting Jennifer Jason Leigh who gives a cautious and intelligent performance that ends up carrying much sympathy.