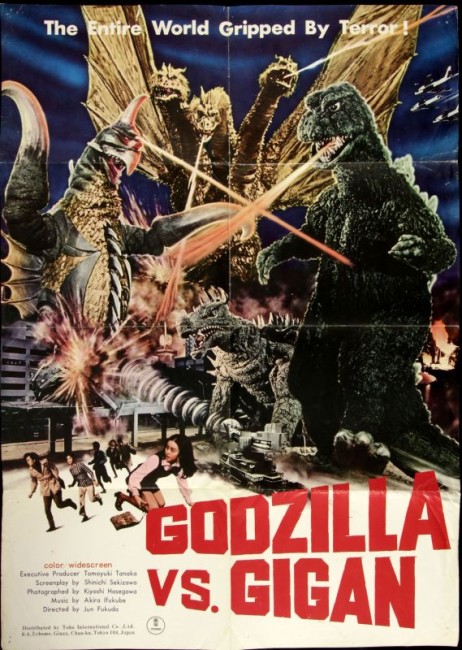 aka Godzilla on Monster Island

The comic-book artist Gengo seeks employment at the giant monster theme park Monsterland. There a tape made by the park’s engineers and stolen by Machiko Shima, a girl searching for her missing brother, falls into his hands. Gengo discovers that the tape contains a signal created by alien invaders. The aliens are mutated cockroaches who emerged to take over their home planet after its inhabitants polluted themselves to death. They are now planning to take over Earth, using the signal on the tape to make Godzilla, Angilas, Ghidrah and Gigan turn and attack humanity.

Godzilla vs Gigan was the twelfth Godzilla film. By now Godzilla had well and truly turned from a ferocious monster that seemed to rain down the guilt and anguish that Japan felt after Hiroshima into a cuddly cartoon figure whose bad mood seemed no more than a mean pout as he trounced in to defend Japan against other equally ridiculous monsters. Jun Fukuda, who succeeded Ishiro Honda as the series director with Godzilla vs the Sea Monster/Ebirah, Horror of the Deep (1966), turned Godzilla into a puerile creation during his five entries in the series.

The plot here is a rehash of the one that has been reused throughout most of the 1960s Godzilla entries such as Ghidrah the Three-Headed Monster (1964), Monster Zero (1965) and Destroy All Monsters (1968) of alien invaders turning monsters against Earth. As with the previous entry in the series, Godzilla vs the Smog Monster (1971), there is the emerging theme of pollution – here the alien invaders are evolved cockroaches that took over after their planet’s people polluted themselves to death.

Godzilla vs Gigan is written down to a level of childish inanity – by this point, the children’s audience and the bad movie crowd are the only ones who like Godzilla movies. There is bad acting on the part of most of the cast – most irritatingly a tendency towards bumbling slapstick characters, especially so a buffoonish hippie sidekick. The dubbing is, as always, atrocious – frequently it does not even match what is happening on screen. Although the worst part about the dubbing is when Godzilla gets a voice during several scenes, which must count as a major low point for the series.

The special effects are extremely cheesy with many effects sequences being recycled from other entries. The film does at least rise to the occasion of the Japanese monster movie during the climactic battle – with all sorts of fun involving Gigan’s buzzsaw, Angilas slamming Ghidrah with his spiked back and Godzilla being body-slammed. (Godzilla gets his ass whipped a whole lot more here than he does in any other film).