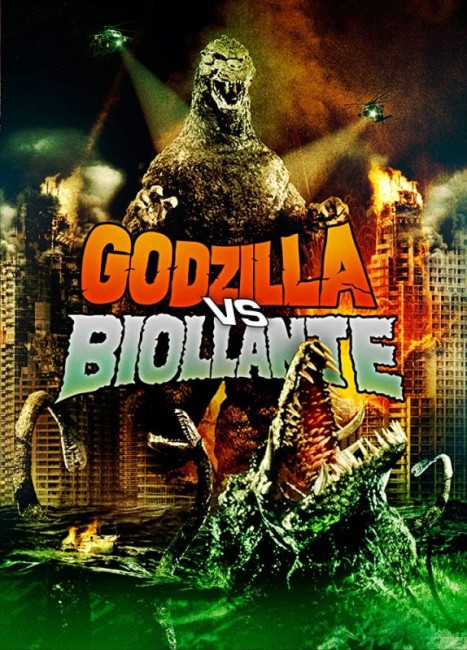 It is five years after Godzilla was defeated by being dropped into a volcano and Japan tries to prepare defences should such ever happen again. Dr Kazuhito Kirishima comes up with the idea of Anti-Nuclear Energy Bacteria that devours the atomic energy that is Godzilla’s life force. He takes a job at a corporation that holds the few remaining samples of Godzilla’s cells. The brilliant Dr Shirgami, whose daughter Erika was killed by terrorists, also signs on. They develop the bacteria but it starts to grow and merges with one of the roses taken from the garden tended by Erika. Godzilla then resurfaces from the volcano. As they try to use the bacteria against it, the new plant lifeform Biollante, which combines Godzilla’s cells and the bacteria, becomes a giant entity in the harbour that stands up against Godzilla’s rampage.

Godzilla vs. Biollante was the seventeenth Godzilla film. Toho made the first Godzilla film with Godzilla, King of the Monsters (1954) then put the Big G through fourteen other sequels up until 1976, during the course of which it gradually moved from an aggressor to a defender of Japan. Most of these pitted Godzilla up against one or other monster that had appeared in Toho’s other films, while new monsters were created for the later entries. Most of the early Godzilla films were weak on special effects, featuring men in big rubber suits beating one or another up. Towards the end of the 1960s and throughout the 1970s, these began to be pitched down towards children and not take themselves too seriously.

There was an eight year gap between the last of the classic Godzilla films Terror of Mechagodzilla (1976) and the next entry Godzilla 1985 (1984). With Godzilla 1985, Toho threw out all the battles between monsters, making a direct sequel to the original 1954 film and taking Godzilla back to being an aggressor once again. The most important thing about Godzilla 1985 was that Toho dispensed with all of the cheap-looking men in rubber suits and harnessed top-drawer visual and animatronic effects (while later films would jump aboard the CGI trend).

Godzilla vs. Biollante was a sequel to Godzilla 1985 and follows on from it closely in terms of plot continuity. Toho sought to create a new nemesis for Godzilla and held a public competition where the winning entrant came up with the original monster of Biollante. Unfortunately, Godzilla vs. Biollante did not go down well with audiences and in the Godzilla films that followed through the 1990s and 2000s, Toho returned to the tried and true and conducted a series of revampings of their classic monsters using top-drawer effects technology.

The main problem with Godzilla vs. Biollante, and the probable reason for its box-office failing, is that not much happens – at least not much that we expect of a Godzilla film. The first half-hour is slow, filled with talky discussions about scientific research. The first appearance of Biollante does not help any – where we see what looks like a giant tree planted in the middle of the bay with the rather absurd effect of it having a rose for a head. The effects are fairly solid and up to par, although one cannot help but feel that Godzilla 1985 and many of the films that followed did a far more exciting job of conducting them. The Super X battles were one of the highlights of Godzilla 1985 but here the Super X-2 gets a squat ugly design that makes it look like a flying Xbox controller.

The criminal failing of the film though is that up until 1 hour 30 minute point, we only ever get a single fight between Godzilla and Biollante. Certainly, in the last few minutes, the film gets itself together for a showdown where Biollante finally reveals itself as a ferocious creation in a semi-reasonable battle sequence but the rest of the film feels lacking when it comes to the knockdown tag-team matches that we expect of the Japanese monster movie.

This also has more scenes shot in English than any other film up until Godzilla: Final Wars (2004), although this does end up with some bizarre moments like when the assassin eliminates a group of armed men and then offers up the cryptic taunt “Kiss you guys” before departing. The film also taps into the emerging mystical/environmental themes that took over some of the later Japanese monster movies, in particular the revived Gamera series. For some entirely baffling reason, Biollante is imbued with a spirit of Dr Shiragami’s dead daughter Erika whose personality has somehow been imprinted in the roses she tended that have merged with Godzilla’s cells, making Biollante into a feminine embodiment of nature.