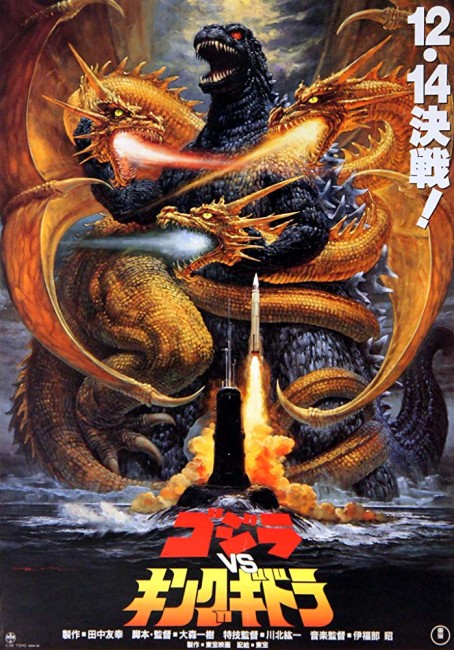 A UFO appears over Japan. This turns out to be a time machine from the year 2204. The three time travellers beg an audience with the Prime Minister where they warn that Godzilla must be stopped as its rampages will cause Japan to become a radioactive wasteland by the time of their future. The writer Terasawa realizes that Godzilla is in fact a dinosaur that helped Japanese soldiers against American troops during World War II, which was then mutated by nuclear testing in 1954. Terasawa and the time travellers return to 1944 to eliminate the dinosaur from the timeline before it becomes Godzilla. Unfortunately, this is a ruse on the part of the time travellers who are in fact trying to prevent Japan from becoming the most powerful nation in the world in their time, due to its being defended by Godzilla. They covertly leave some genetically engineered creatures behind in 1944. When they return to the present day, the nuclear tests have caused these creatures to mutate into the giant three-headed King Ghidorah, a creature that the time travellers are now able to control as they wish.

Godzilla Vs. King Ghidorah is also one of the most unique and original of all Godzilla films. It certainly has the most conceptually audacious plot of any Godzilla film – being centred around time-travellers from the future who go back into the past to eliminate Godzilla’s wake of destruction throughout history. The film seems to overflow with ideas as this is then revealed to be a ruse and that their scheme is to instead substitute Ghidorah at the site of the A-bomb tests that created Godzilla and to not only eliminate Godzilla from becoming Japan’s protector against any threat, something that will allow Japan to become the most powerful nation in the world in the future, but to substitute a creature that can be more easily controlled.

It is an uncommonly idea-ridden Japanese monster movie – Godzilla doesn’t even make an appearance until at least half-an-hour in. (It also becomes a origin story, dealing for the first time in the series with the creation of Godzilla). The plot has some unique doglegs that twist around to have both Godzilla and Ghidorah each playing both the aggressor and defender against the other’s rampage at different points in the film. Although, the script doesn’t always think the time travel out logically at times – wouldn’t the elimination of Godzilla in the timeline also erase him from people’s memories in the present?

One of the most enjoyable aspects of the modern Godzilla films are the great effects. Here there is all the exhilarating scenes of mass destruction that one has come to expect of the genre. There is an excellent sequence with Ghidorah fighting a series of Air Force jets. The climax with Godzilla and the partially cyborgized Ghidorah duking it out is breathtaking.