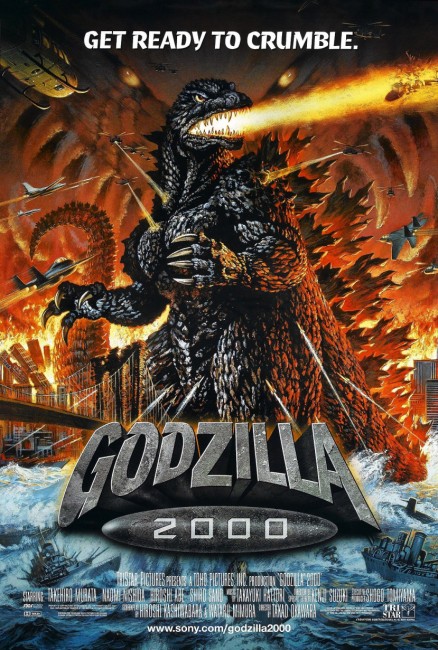 The Godzilla Prediction Network tracks the movements of Godzilla as he appears again, apparently intent on smashing all power plants. Meanwhile, scientists puzzle over the appearance of a meteor that has landed at sea. Sunlight brings the meteor to life, revealing a spaceship hidden inside. It emerges and then creates a swathe of destruction across Japan, sucking up energy and information, intent upon obtaining Godzilla’s special regenerative tissue in order to give itself form.

Godzilla 2000 was the first Japanese Godzilla film to be given a theatrical release in the US in fifteen years – the last to do so before that had been Godzilla 1985 (1984). The reasons for this are patently obvious – Godzilla 2000 was the one of the better Godzilla films to emerge from Japan in fifteen years. During this time, the Japanese had learned how to use motion control and the new digital and CGI technologies and had developed a proficiency with them that allowed Godzilla 2000 to compete alongside the current run of Hollywood CGI blockbusters.

The special effects in Godzilla 2000 are spectacularly good for once. The battle sequences with incredibly detailed model city streets and the camera zipping up to the level of Godzilla and Ogra towering over ships and buildings, being circled by helicopters, or following the path of missiles under bridges, all flawlessly blended with human observers, gives both a real sense of the immensity of the creatures and an authentic sense of verisimilitude to the action. This is the first Godzilla film where one can say they have felt like they were in the middle of the action.

The added bonus with Godzilla 2000 is that it is well directed, which is something one stretches to think can be said about almost any of the other films – indeed Takao Owara’s other Godzilla films, Godzilla vs Mothra (1992), Godzilla vs Mechagodzilla (1993) and Godzilla vs Destoroyah (1995), are some of the weakest of the modern era. There is a great opening – a lighthouse keeper looks out the turret window to see the incongruous image of a boat suspended in mid-air, which is then revealed to be stuck between Godzilla’s teeth and is followed by a tense sequence – inspired no doubt by the similar sequence in Jurassic Park (1993) – where a four-wheel drive tries to avoid Godzilla by backing into a tunnel collapsing around it. There is also a suspenseful sequence in the middle with the heroes trying to escape from a building that is about to blow up.

On the minus side, there is some occasionally lame comic relief – a sequence where an employer keeps clonking his employee on the head with a pipe – although the scenes with the hero’s precocious daughter Mayu Suzuki are amusing. The English language dubbing, although a good deal better than almost all the other Godzilla films, is sometimes flat and results in some occasional howlers – “It’ll go through Godzilla like crap through a goose,” says a general of their new missile. Some of the exclamations are frankly bizarre – like the Japanese shopkeepers who cry out “Gott in Himmel.” The translators must have been comic-book fans, having a newspaper editor at one point give a cry of “Great Caesar’s Ghost” – the favourite exclamation of Superman’s editor Perry White.

(Nominee for Best Musical Score at this site’s Best of 1999 Awards).