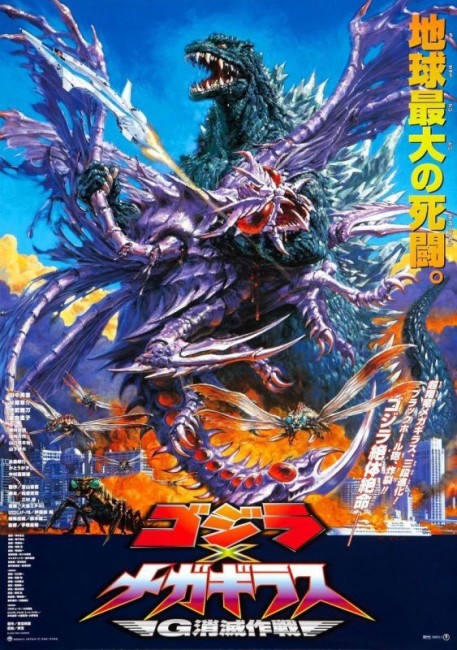 The inventor Kudo is recruited by Kiriko Tsujimori to join G-Graspers, an elite hi-tech force designed to combat the menace of Godzilla. Nuclear power in Japan was banned after Godzilla’s first appearance but the construction of a plasma reactor in 1996 has caused Godzilla to resurface. Kudo leads an ambitious plan to build Dimension Strike – a miniature black hole fired from a satellite that will swallow up Godzilla and everything in the vicinity. After the first test of Dimension Strike, a young boy finds a mysterious egg near the test site. He takes the egg with him as his family move to Shibuya but is forced to throw it into the sewer after it grows too big. A giant prehistoric dragonfly, which scientists later identify as a Meganula, hatches from the egg. This in turn gives birth to a swarm of Meganulon, which cause Shibuya to become flooded. Just as Dimension Strike is about to be launched against Godzilla, the Meganulon swarm it. They cause the detonation to go awry and Godzilla survives. As the scientists race to repair Dimension Strike, the Meganulon give birth to the even more powerful Meganulon queen Megaguirus. It is set for Godzilla and Megaguirus to face off against one another in downtown Tokyo.

Godzilla vs Megaguirus was the 24th of Toho’s Godzilla films in the series that began all the way back in 1954 with Godzilla, King of the Monsters (1954). (See below for the other Godzilla films). The Godzilla entries from the 1980s and beyond started to adopt modern effects technology – CGI, animatronics, blue and green screen opticals and the like – to make the films into something genuinely spectacular. Godzilla vs Megaguirus saw the entry of a new director Masaaki Yezuka into the series. Yezuka had previously worked as an assistant director on various other Japanese fantasy and Toho films and made his debut here, going onto make two subsequent Godzilla films – Godzilla Against Mechagodzilla (2002) and Godzilla: Tokyo SOS (2003), followed by Samurai Commando Mission 1549 (2005), a remake of Time Slip (1981). Alas for Toho, Godzilla vs Megaguirus was the lowest earning of all post-millennial Godzilla films.

While most of the modern Godzilla films have done spectacular things in the special effects department, Godzilla vs Megaguirus is a mixed affair. It wavers between discovering the effects class of the modern Godzilla films and being stuck down around a tawdry and threadbare level that is only a few steps above the shoddiness of some of the 1970s entries. There are some very so-so effects with the emergence of the queen Megaguirus. One is never less than aware that Megaguirus is a puppet – its eyes are static and the jaws do not move properly, while one can see the strings holding her up. There are some very poor model effects during the underwater sequences and of the flooded city. Even G-Gripper headquarters seems an impoverished operation.

That said, there are some undeniably impressive effects set-pieces where the Toho technicians come into their own – the sequence where the Meganulon dragonfly first emerges from its cocoon halfway up the side of a wall; a fine sequence where Misato Tanaka goes down in the ocean in a life raft but manages to survive as Godzilla emerges from beneath by grabbing onto the spikes on the back of his neck.

Especially good is the scene where Godzilla battles the Meganulon dragonflies on the island, they attacking and swarming him in a great mass, he torching them en masse by sweeping his radioactive breath around in a great swathe and igniting them using the radioactive fins on his back as they clamber around him, followed by the firing of Dimension Strike blasting the entire island. And when Godzilla and Megaguirus clash, the film finally comes to life. Here the film mounts another rousingly entertaining mass destruction climax Toho-style with the two creatures battering one another, throwing each other through buildings, Godzilla firing balls of energy and biting Megaguirus’s claws off, Megaguirus battering a pyramid atop a building down onto Godzilla’s head and so forth.

At times, Godzilla vs Megaguirus feels like a blend of a Godzilla film and Thunderbirds (1965-6), of which a great many Japanese anime tv shows of the 1960s and 70s borrowed the basic concept. It offers up a nerdy techno-geek hero (who highly improbably seems not to be able to find employment designing weapons of mass destruction and instead is forced to sell makeshift gadgets as a street peddler); an action team (with the eyebrow-raising name of G-Grippers) with their various areas of expertise; and especially various sequences where the vehicles are unveiled amid endless countdowns etc etc. The film is filled with a gee-whiz enthusiasm about the gadgetry that seems pitched directly to the fourteen year-old boy.

The script seems ill assembled at times. The film has done almost zero research on what a real black hole would be like – even at molecular size, a black hole would be capable of sucking the entire Earth in around it like a suddenly punctured beach ball. Elsewhere, there are sloppy plotting holes. It is never made clear whether it was the Dimension Strike test experiments that caused the Meganulon to appear. If not, it seems a peculiar coincidence that they suddenly appear in the immediate aftermath of the detonation; if so, the connection is never explored any further. Certainly, no explanation of the Meganulon’s origin is ever offered beyond the connections we are left to draw here. Godzilla vs Megaguirus is also another of the modern Godzilla films that tries to exist as an independent entity and pretends that no other films existed between it and the original Godzilla, King of the Monsters.