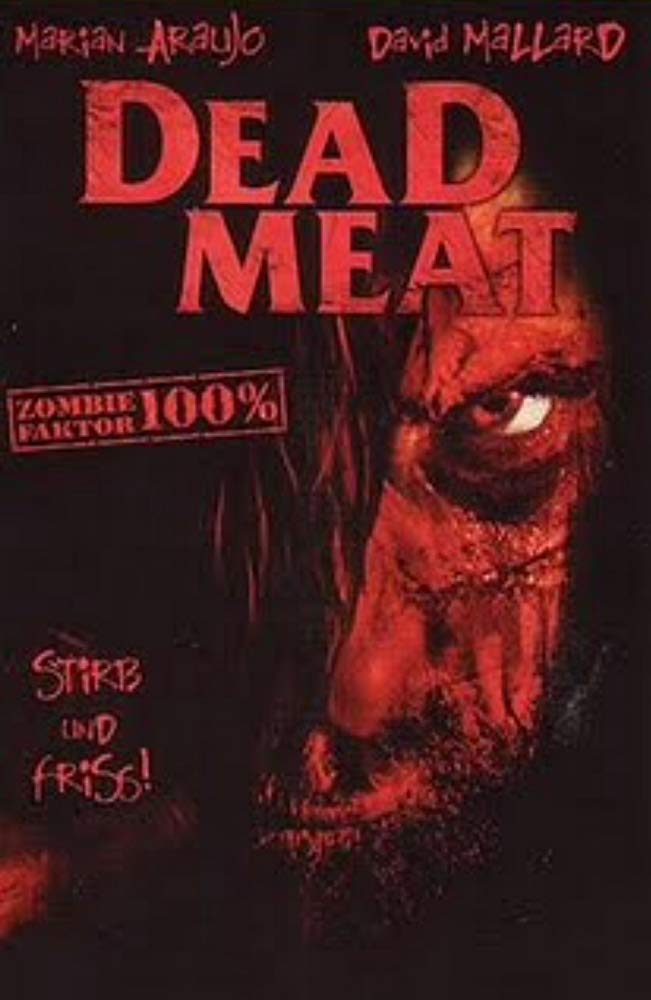 Helena and her boyfriend Martin are driving through Leitrim County in rural Ireland when they hit a man on the road. They place the body in the car to take him with them, only for the body to come back to life and bite Martin in the neck. Helena runs to a farmhouse to get help but is attacked by zombies that close in all around, including the now dead Martin. The local gravedigger Desmond comes to her aid. They flee through the countryside, joined by various others, trying to avoid zombies that are everywhere. It appears that the outbreak has been caused by humans eating meat infected with Mad Cow Disease.

Dead Meat is fashioned after the George Romero-styled zombie film circa Dawn of the Dead. Maybe you could also draw some analogies to 28 Days Later – both Dead Meat and 28 Days Later are British zombie films, both come shot on digital video and both feature people caught in tough survivalist situations. Dead Meat is made with a general competence. The film has a welcomely unstinting goriness, an area where both 28 Days Later and Dawn of the Dead 04 proved tame. Though Dead Meat sometimes gives evidence of being an amateur production, the actors all give professional performances. The show is stolen in large part here by Eoin Whelan who has the audience in laughter with his motormouth dialogue delivery, even if his accent is so thick (it is hard to tell whether this is deliberate or not) that one is unable to understand a single word that he is saying.

Unfortunately, what does Dead Meat in is the relative amateurishness of the direction by Conor McMahon. McMahon is professional in most aspects but never seems to know when his set-ups are cliché shots or when his dialogue comes out as corny. The first third of the film with Marian Araujo in the farmhouse and then joining David Muyllaert in a trek across the countryside while avoiding zombies is banal. In these sections, Dead Meat comes across like a more professionally and competently made Italian zombie film, we have seen most of this before and there is nothing exceptional to any of it.

McMahon succeeds better during the night journey by car through zombie-infected land, which attains some atmosphere. Alas, the last third of the film with the cast being pursued through a castle by zombies again falls into cliché simply because Conor McMahon’s shots and splatter effects fall into much of a muchness and offer up nothing we have not seen before. There is a downbeat ending, although again this is a cliché of the genre and one borrowed from George Romero’s The Crazies (1973).

Surprisingly, unlike many Romero homages, Conor McMahon plays the show seriously and chooses not to plant his tongue in cheek, although one cannot help but think that such may have actually benefited the film at times. Perhaps Conor McMahon’s failing is that Dead Meat emerges as simply a fannish zombie/splatter film, made in enthusiastic homage to Romero. The crucial failing is that, unlike Romero’s zombie films, it is not a film that works on any deeper level and there is nothing more to it than that.