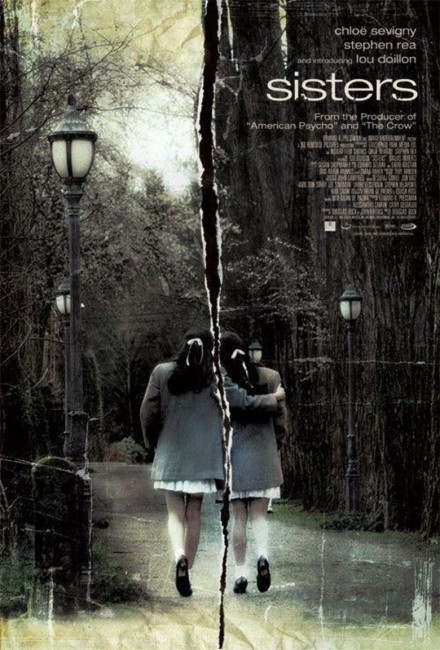 At the Zurvan Institute in Vancouver, Dr Dylan Wallace is present at a magic act performed for the patients by visiting psychiatrist Phillip Lacan. There Dylan meets Angelique Turner who is acting as Lacan’s assistant. She invites Dylan back to her apartment for the night. She mentions that her twin sister Annabelle is in the other room and that it is their birthday tomorrow. In the morning, Dylan slips out as Angelique sleeps to buy a birthday cake but upon returning to the apartment he is attacked and stabbed by Annabelle. Meanwhile, reporter Grace Collier has broken into Lacan’s office in the building opposite in search of information about his illicit activities and witnesses the murder taking place via the closed circuit tv cameras hidden in the apartment. She calls the police to the apartment but Angelique has called Lacan who has cleaned up and hidden the body inside the tv set. Grace is humiliated when the police are unable find anything. She is nevertheless determined to pursue the story. Her investigation uncovers how Angelique and Annabelle were Siamese Twins until an operation to separate them went wrong.

In this case, Sisters is a remake of Sisters (1973). Sisters 1973 was the first of the psycho-thrillers directed by Brian De Palma who went onto make a name for himself with his visually dazzling and sexually provocative thrillers throughout the 70s and early 80s, including the likes of Dressed to Kill (1980), Blow Out (1981) and Body Double (1984). With the film’s wild mix of Siamese twins, disturbed psychiatrists and De Palma’s stylistic effects and games of reality and illusion, Sisters gained a considerable word of mouth acclaim. It remains one of Brian De Palma’s best psycho-thrillers.

The Sisters remake comes from Douglas Buck, a newcomer director who had previously made three short horror films that were collected and released as Family Portraits: A Trilogy of America (2003). Buck’s one professional credit had been as co-writer of the Troma film Terror Firmer (1999). Unfortunately for Buck, Sisters went directly to dvd in all territories where it attracted next-to-zero attention, unlike most of the abovementioned horror remakes.

The story remains essentially the same as the original but a number of fundamental changes have been made. The most notable difference is the change of the beginning – in the original, the equivalent of Dallas Roberts’ character meets Angelique (Margot Kidder’s Danielle) on a Candid Camera-type tv gameshow and she invites him back to her apartment. Here this has been changed in order to introduce the sinister psychiatrist earlier in the show – now Dallas Roberts is a doctor who meets Angelique/Danielle when the sinister psychiatrist (Stephen Rea) comes to put on a magic show at the asylum where he works. This disappointingly lacks the sense the original had where De Palma kept messing with the audience’s expectations, pulling back from what we believe to be an embarrassing incident to reveal it is a staged tv show and then heading off in a completely different direction.

Chloe Sevigny’s reporter now witnesses the murder take place on closed circuit tv rather than across the street from the apartment, which works as an acceptable change. For some reason, the body is now improbably buried inside a tv set rather than a fold-up couch – you keep wondering why the investigating police fail to find the wiring and circuitry Stephen Rea must have had to tear out in order to pack the body in. Charles Durning’s private detective who follows the trail of the couch with the missing body now becomes Chloe Sevigny’s boyfriend (J.R. Bourne) and this subplot peters out rather than is followed to the end.

The biggest disappointment about the remake is the ending. [PLOT SPOILERS]. We get Chloe Sevigny sneaking into the asylum then undergoing the dream scene from the original where she sees herself as the dead twin. Now she inexplicably emerges from this having become the dead twin, with her hair turned dark and in the last shot walking off alongside Lou Doillon and both of them dressed in young girl’s dresses. The original by comparison held a disturbing bleakness as it ended with the heroine hypnotised by the psychiatrist and unable to talk about the murder she had witnessed and with the detective left sitting up a power pole watching the couch abandoned in the middle of nowhere. The ending here makes no real sense.

On its own and without comparison to the De Palma film, one supposes that Douglas Buck captures a certain sinister effect at times. There is undeniable suspense created during Chloe Sevigny’s venture into Stephen Rea’s office. The film is certainly very gory. However, in comparison to Brian De Palma’s virtuoso stylism – he telling the story in two split screen streams at one point – Douglas Buck is a journeyman director. Without De Palma’s twists and illusions, the remake cannot help but feel as though the original has been simplified and dumbed down to become a straightforward and routine thriller that is destined to fill the cut-price video rental bins at best. One should at least commend Sisters for being a US film that shoots in Canada and allows Vancouver to stand in and be itself rather than pretending to be a US city.

Sisters does feature the lovely French actress Lou Doillon in the role of the twin sisters where Doillon’s beauty acts as an exquisite enigma. Chloe Sevigny, an actress who has a tendency to seem either morose or stoned, gives a relatively normal performance for once. It still fails to make Sisters anything memorable.

The only other work that Douglas Buck has directed subsequently is the The Accident episode of the horror anthology The Theatre Bizarre (2011).