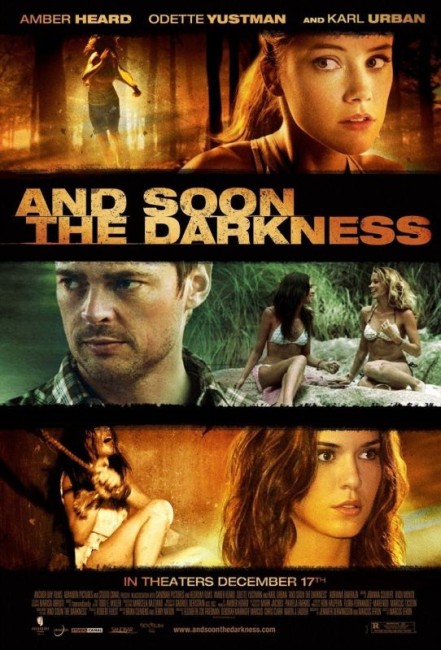 Two American girls, Stephanie and Ellie, are on a cycling tour through Argentina. They stop in a small town but Ellie gets in trouble after making out with a local boy at a bar and he is too forceful in trying to have his way with her. The next day out on the road, the two of them argue over the incident and an annoyed Stephanie heads off and leaves Ellie. Not far down the road, Stephanie reconsiders and returns but Ellie has disappeared. She finds spilt blood and Ellie’s dropped cellphone but the local police officer seems disinterested in doing anything to look for her. Stephanie starts searching on her own but it becomes apparent that Ellie has joined an increasing number of girls who have gone missing in the area and that the locals are covering up what has happened.

In this case, the original film was the British-made psycho-thriller And Soon the Darkness (1970), which featured two English girls stalked while on a cycling tour of the French countryside. This leads to the interesting question of why exactly And Soon the Darkness is being remade. It certainly cannot be because the original was such a classic that the people behind the remake were hoping to tap audiences’ memories of it, as the original barely had a theatrical run and vanished from cinema screens almost immediately after it was released. It did belatedly gain a reputation after being released on dvd in the 00s but largely only with fans of out of the way material such as this site here.

It is certainly difficult to make a case for the original And Soon the Darkness as a long lost undiscovered classic so the question is why we have a remake. Can it be that we have now reached a point where the idea of a 70s/80s horror remake is so generic that it no longer matters what the original is? Or perhaps that the people behind the remake are such fans of the original that they have made it as a labour of love, although this can hardly be the case either as they dump a substantial amount of the original.

The remake transplants the story from rural France to Argentina, which works passably well. The two girls are now rewritten as Americans on the bizarre assumption that modern audiences will not watch films that do not feature Americans as leading characters. Back in 1970, a film about two girls on a cycling tour of a foreign country was something unusual, however by 2010 we have been through the slasher movie and now they are standard characters for the genre.

The girls are much more sexualised than in the original – director Marcos Efron drinks in the image of Odette Yustman dancing provocatively in a bar and focuses in closeup as the two girls strip to their bikinis beside a river. Here the girls are written with typical cliche slasher movie morality – the more sexually active girl attracts trouble and is targeted by the abductors seemingly because of her free sexuality, while the chaste heroine survives because she has her mind on things other than boys and alcohol.

Where the original had two girls cycling through a foreign country, the effect was one of deliberate alienation – about their panic at trying to get help in a country where they did not speak the language. There was an undeniable critique of both British and French attitudes – of French arrogance about the superiority of their language and culture and British distaste at being made to submit to it. Played out here between the US and Argentina, the same thing fails to work.

Moreover, the translocation to South America smacks of an undeniable racism. Now the problems the two girls face are not so much the language barrier as in the 1970s version but because Odette Yustman has gotten drunk and stirred up the locals with her free and open sexuality. The portrayal of the Argentinean locals makes them seem only a couple of steps above the hicks in Straw Dogs (1971) and Deliverance (1972) – glowering in the directions of the heroines without speaking or all the local men wanting to force themselves onto or sell American girls into white slavery. Indeed, the remake seems far less interested in two girls alienated in a foreign country than in stopping to pose for gorgeous landscape shots, which surely makes it a film more about tourism advocacy and exactly the opposite of what the original did with its landscape.

One of the better parts of And Soon the Darkness 2010 is the location used during the last twenty minutes. This gives the impression of being an entire town that has either been abandoned or perhaps wiped out by extreme weather events. There is a haunted, almost J.G Ballard-esque feel as Amber Heard wanders and is pursued through the abandoned ruins of hotels, houses and the reeds of an inland lake. Unfortunately, these last 20 minutes are also the least interesting in the film as they degenerate into standard slasher movie tactics as the girls try to escape, are pursued, seek shelter, are recaptured etc etc. Marcos Efron fails to enervate these scenes with anything more than standard suspense devices.

And Soon the Darkness 2010 is co-produced by lead actress Amber Heard who briefly had her star touted as a genre heroine with roles in films like All the Boys Love Mandy Lane (2006). The Stepfather (2009), Zombieland (2009), The Ward (2010) and Drive Angry (2011). Heard does okay in the lead role, although is nothing standout. She seems no more than another blandly good-looking blonde, of which Hollywood casting agencies seem to spilling over at the edges.

A far better performance comes from the lesser known Odette Yustman, who has had roles in films such as Cloverfield (2008) and The Unborn (2009). Aside from the fact that she has the far more interestingly provocative role than the generic good girl that Amber Heard has chosen for herself, Yustman seems to be doing all the acting, something that she does seemingly in the way she crinkles her eyes. Rising Kiwi star Karl Urban has been brought in as the male lead, although this is a forgettable role that is never inflated to be filled with someone of Urban’s leading man presence, before he is pointlessly despatched.