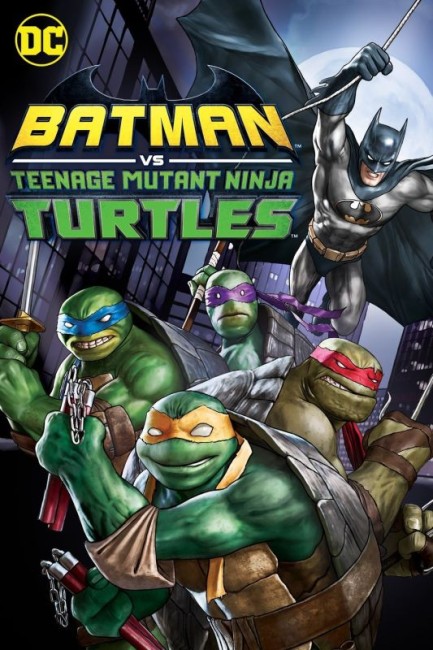 Batman is investigating a spate of hi-tech thefts being conducted by ninja. Meanwhile, the Teenage Mutant Ninja Turtles have come to Gotham City, following the trail of Shredder who has collaborated with someone in Gotham to steal the Cloud Seeder from Wayne Enterprises. After coming up against each other, Batman believes the turtles are part of the ninja, while they think he is Shredder’s accomplice. After the turtles track Batman’s movements to enter the Batcave, they realise they are on the same side. They agree to collaborate, even though Batman finds the turtles’ impetuous ways an irritation. Shredder’s real accomplice is Ra’s al Ghul. Obtaining the Cloud Seeder, Ra’s unveils a scheme to cause chaos by dropping mutagenic ooze all over the city. He and Shredder hatch a plan to break into Arkham Asylum where the ooze is injected into the super-villains imprisoned there, transforming them into animal hybrids.

The film is based on the six-issue comic-book mini-series Batman/Teenage Mutant Ninja Turtles (2015-6). This was successful and led to several follow-ups. The film loosely adapts the original comic-book, incorporating various plot elements such as Shredder’s collaboration with Ra’s al Ghul, the Turtles tracking down the Batcave and the mutation of the Batman super-villains. What has been dropped is the comic-book’s explanation for the crossover where the Turtles are transported into the DC universe. Here it is assumed that the two live in the same world, which does depend on the improbable idea that in today’s media-saturated world neither have heard of the other.

At first glance, the idea of a Batman and Teenage Mutant Ninja Turtles crossover is a gimmick. The two don’t seem to mix. The Batman milieu is dark and grim, takes place in brooding, shadowy spaces, while the Turtles are manic teenagers who face alien invaders and villains of mad science who spout a barrage of surfer speak and have a love of pop culture. Batman is usually a character preferred by more adult readers, whereas the popularity of the Turtles in their heyday largely rested with pre-teen audiences. It is hard to see the two meeting without the tone of either’s milieu being compromised.

There are a number of scenes where this proves to be the case. You also end up wincing at an ending that has Batman proclaiming “Cowabunga” and “It’s pizza time.” And for the Turtles who were heavily criticised back in the 80s/90s for supposed violence, a scene here where Ra’s al Ghul casually beheads a guard at Arkham is quite a jolt. On the other hand, the crossover comes with some amusement that plays off the clashing styles – Alfred eye-rolling at the turtles having pizza delivered to Wayne Manor, being referred to as “dude” or them skateboarding down the banisters. In their first few scenes, the Turtles are going “cool” as seeing The Penguin sprout an umbrella gun, sword and helicopter, while admiring Gotham City for its colourful villains.

The film also gets in a reasonable degree of fanservice. The Batcave is outfitted with the giant coin and dinosaur mock-up like it always has been since the 1940s. There is even a shot featuring a cabinet of previous Batman suits that induces Bob Kane’s original red batsuit with wings before it was redesigned by Bill Finger – see Batman & Bill (2017). There is also the appearance of minor Turtles character Dr Baxter Stockman having been transformed into a fly as he was part way through the original animated series.

On the other hand, there are some bits that are definitely off. The film goes with the style of Batman with a bat in a yellow circle emblazoned on his chest that was introduced in 1964 but for some reason the Batsuit is coloured cerulean blue. That said, Troy Baker nails the grim Batman voice to perfection (and does a first for any animated film in also voicing the role of The Joker). The other is the characterisation of the Turtles. Their size seems to vary between the bigger bulkier turtles of the 2014 film and standard human-sized figures but they have been drawn in square, blocky shapes as though the South Korean animation house that the duties were shipped out to were in a hurry to meet their deadline. Equally, Shredder is a muchly reduced nemesis, being turned into Ra’s al Ghul’s bitch and constantly being put down for his failings.

The biggest issue is the plot, which often feels forced in order to have action scenes with the various parties teaming up and playing off against other canonical characters. The Turtles track down the Batcave by a process of handwave triangulation that seems so casual you wonder why none of the other established villains have not done so before, and then simply swim inside and find it unguarded.

The tipping point where the film just gets silly is the visit to Arkham Asylum. In order to merge the milieus, the various super-villains are injected with the mutagenic ooze that transforms them into animal beings – Mr Freeze becomes a polar bear, Bane a jaguar, Harley Quinn a dog, The Joker a snake and so on. There is no real reason for the sequence other than to transform the bad guys into the mutant animal hybrids the Turtles regularly encounter. For even more contrived reason, Batman is injected with the ooze at one point causing him to become an actual bat – the film seems unaware there is a Batman villain called Man-Bat who does precisely that.

There is an even sillier sequence later in the show with Batman and the Turtles racing around the wharves in the Batmobile, Turtle van and assorted bikes with the Turtles firing New York City sewer manholes at the bad guys as they fight off a mutant elephant and dinosaur. Jake Castorena did solid work as co-director of the recent The Death of Superman (2018) but between the cut-price animation and canned sequences, his work here disappoints.