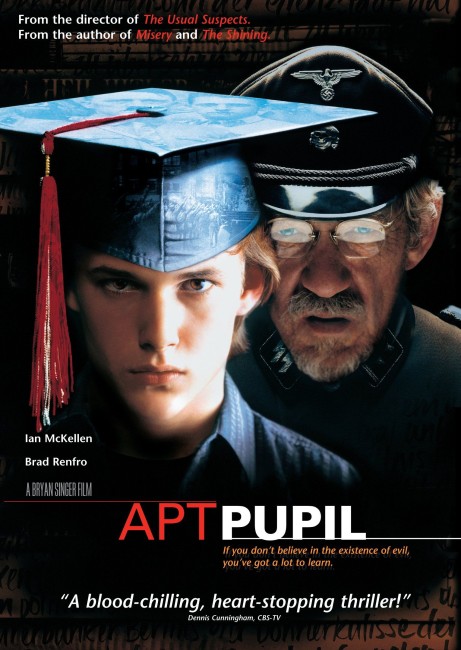 Todd Bowen, a teenager fascinated with the Holocaust, confronts the aging Arthur Denker with proof he has pieced together that Denker is wanted Nazi war criminal Kurt Dussander, a commandant at the Patin concentration camp. In return for his silence, Todd demands that Dussander tell him what the Holocaust was like. A tenuous friendship develops between the two. Dussander poses as Todd’s grandfather to get him out of trouble with falling grades at school. However, Dussander then turns around and blackmails Todd with his complicity should the truth of his identity ever be revealed.

Common lore has it that the best (and in some views only worthwhile) adaptions of Stephen King’s works are ones that fall outside of the horror genre – Stand By Me (1986), The Shawshank Redemption (1994) and to a lesser extent the little-seen Dolores Claiborne (1995) – as well as genre works that have been made to appeal outside the genre such as The Green Mile (1999) and Hearts in Atlantis (2001). That said, there are a number of generally well-regarded films that do also fall within genre guidelines – namely Carrie (1976), The Dead Zone (1983), Misery (1990), The Mist (2007). (See bottom of the page for other Stephen King adaptations). Apt Pupil certainly falls outside of the genre, although can also read as a horror film. Seemingly, as though trying to prevail against the common lore of most King films being disappointments, Stephen King’s name barely featured in any of the publicity for the film.

Apt Pupil had a troubled production history. Filming was begun in 1987-8 by director Alan Bridges on a version that would have starred Nicol Williamson as Dussander and Ricky Schroder as Todd but the production collapsed 11 days before the end of shooting due to financial problems. (Stephen King has heaped high praise on the completed footage, saying he thought it would have been the best of the films adapted from his works). A completely new production was begun in 1997 by Bryan Singer who was then riding on the success of his highly-acclaimed debut with The Usual Suspects (1995) and who would go on to make X-Men (2000), X2 (2003) and Superman Returns (2006), before returning to matters Nazi with Valkyrie (2008). However, this production was riddled by troubles too. The parents of several of the boys involved in the shower scene sued Singer and the producers for the sexual abuse of minors, claiming that the boys were forced to strip naked and wear see-through underwear for the scene, a claim that became even more controversial when some of the boys publicly denounced the charges. The film was so desirous of good word of mouth that its release was held up so that it could be screened before a group of New York rabbis for their approval of its depiction of the Holocaust.

One wishes that such had been worth it. Unfortunately Apt Pupil is one occasion when a non-genre Stephen King film does not automatically prove worthwhile. Bryan Singer’s approach to the material seems oddly miscalculated. The film is built on the concept of a youth eagerly taking lessons in evil from an aging Nazi. Yet, Bryan Singer peculiarly keeps the horrors of the Holocaust entirely off screen with the exception of a single scene. The horror of the Holocaust is crucial to the creepy fascination that Apt Pupil seems to hold in synopsis but Singer avoids almost all depiction of it and instead concentrates on the games of control between the boy and the old man.

This may well have been calculated intent – the belief that the horrors of the Holocaust are so disturbing that no scene of anybody sitting around a table describing them could possibly do their true abhorrence any justice. However, in practice the effect is akin to reading H.P. Lovecraft with people being driven crazy by monstrosities that are maddeningly depicted as “indescribable” and “too horrifying to mention”. It is not as though Bryan Singer is disinterested in the depiction of evil but one gets the impression he fails to trust in the ability of verbal description alone to depict it and instead resorts to a series of crudely unsatisfying dramatic gimmicks like showing Ian McKellen trying to stuff a cat into a gas oven or Brad Renfro crushing a wounded pigeon with a basketball.

Equally so, Bryan Singer seems disinterested in the detective story – all we see of Brad Renfro piecing together Dussander’s identity is an encounter on a bus and then Brad Renfro presenting a fait accompli of deduced clues at Dussander’s doorstep, the entire intermediary detective process having been entirely passed over. The script also seems dependent on patently contrived devices like a Holocaust survivor ending up in the hospital bed next to Dussander or Brad Renfro being able to recognize Dussander’s identity from a single glance at a distance in the rain.

Similarly, the film seems to have an entirely wrong conception of what Nazism was about. The film used the captivating byline: “If you don’t believe in the existence of evil, you’ve got a lot to learn.” In reality, Nazism could be said to be about a lot of things – blind stupidity, thuggish mob mentality, unthinking racial victimization – almost anything except evil. Evil tends to imply that what was done was conducted with full cognisance of one’s actions and calculating intent, yet the Nazi era almost feels like a nation allowed their consciences to go to sleep. Yet that is the way that Bryan Singer wants to portray it. What we see are scenes with Dussander cackling as he tries to stuff a cat into a gas oven; relishing the sensual pleasure as he slices Elias Koteas’s throat; engaging in a psychological game as he impersonates Brad Renfro’s grandfather. What we never see are any of the justifications for the Holocaust, any of the disturbing excuses – “I was just following orders … Anybody else would have done the same … Nobody dared speak out … They were no better than animals,” that Nazism and its sympathizers used to excuse their actions when the full horror of the Holocaust became known. The Dussander presented in Apt Pupil is a man who is fully cognisant of his actions, not a man who was following orders with unquestioning moral conformity; and in playing it that way the film monumentally fails to understand its theme altogether. In Ian McKellen’s shrewish performance, Dussander comes across as someone who did what he did out of pure malice and nastiness. How scarier a film this might have been, one thinks, if Dussander instead sat there indifferently justifying his actions and methodically explaining the necessity of what he did.

Furthermore, Bryan Singer seems distracted by the need to punctuate every relationship in the film with an underlying fear of homosexuality – the lasciviously sensuality with which Ian McKellen caresses and then slits homeless man Elias Koteas’s throat, something that Koteas takes to be a homosexual caress; the camera moving into closeup every time McKellen touches Brad Renfro; Renfro’s fascination with Dussander’s stories causing an inability to sexually perform when he is with Heather McComb; Renfro blackmailing teacher David Schwimmer’s silence with the suggestion that he molested him and that paedophilia was the cause of his divorce. The tension in the scenes between the various people hold a considerable charge – the games of control between Ian McKellen and Brad Renfro, especially the scene where Renfro commands McKellen to get into uniform; the scene where Renfro invites McKellen to dinner; the scenes between McKellen, Renfro and an almost unrecognisable David Schwimmer as the school counsellor; and the effective twist ending with Renfro blackmailing Schwimmer. Why Singer sees the need to lace every encounter with such dark homo-erotic suggestion is baffling and what it all serves is a mystery.