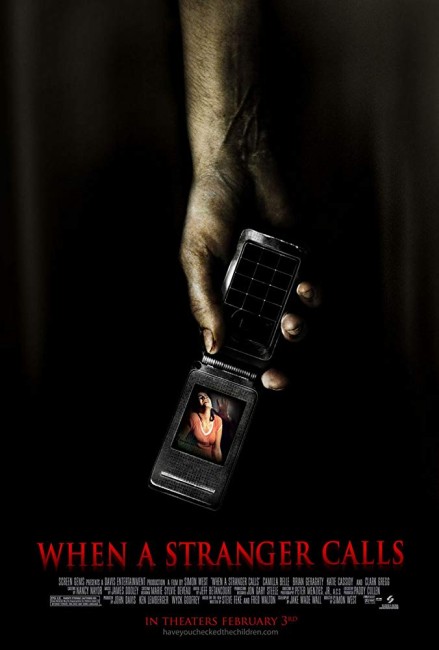 For going wildly over limit on her cellphone bill, teenager Jill Johnson is grounded by her father and given a job babysitting instead of being allowed to go to a big party with her friends. She is sent to babysit the two children of the Mandrakis family. Once she is on her own in the Mandrakis’s lavish house, Jill starts receiving a series of alternately prank and harassing phone calls. These become increasingly sinister in nature. Soon Jill realises there is a killer lurking nearby and maybe inside the house.

The producer behind the new When a Stranger Calls is action producer John Davis and the director is Britisher Simon West, best known for big and noisy action films such as Con-Air (1997), Lara Croft, Tomb Raider (2001), the remake of The Mechanic (2011) and The Expendables 2 (2012).

The question that faces When a Stranger Calls 2006 is how to revive the idea of When a Stranger Calls when the film has been parodied in the opening scenes of Scream (1996) and double-parodied by the time of Scary Movie (2000), while the killer inside the house gag was even turned into an urban legend in Urban Legend (1998).

Rather than remake the whole of When a Stranger Calls, Simon West only remakes Fred Walton’s original short film The Sitter. The remake dumps the scenes that Fred Walton padded out around The Sitter – that it to say the bulk two-thirds of When a Stranger Calls 1979 involving Charles Durning’s detective obsessively pursuing psycho Tony Beckley and Beckley then returning to terrorise Carol Kane who had become a married mother in the interim.

This serves to make When a Stranger Calls 2006 into much more of a slasher film than When a Stranger Calls 1979 ever was, with this version being extruded out around babysitter Camilla Belle being harassed on the phone and then pursued throughout the house. In the opening scenes, Steve Eastin makes a brief appearance as a detective who could have been modelled after Charles Durning, although Eastin never appears again other than this single scene.

Certainly, When a Stranger Calls 2006 makes apposite sense as a remake. The film smartly updates things from 1979 and the era of the cord and dial phone into the modern era of cordless and cellular phones and houses with electronic alarm systems. The production design team have gone overboard and turned the original anonymous family home into an amazing dream home out of an architect’s most fanciful budget-unlimited imaginings with open-plan design, indoor atriums, aviaries and fish pools.

Amidst this, Simon West generates competent suspense. When a Stranger Calls 2006 is ultimately not a truly memorable film, but West keeps the tension at an adequate level and achieves decent atmosphere through the use of moody lighting effect. One peculiar thing that Simon West does is to keep the killer’s face hidden in shadow up until the very last frame, while for the bulk of the film (up until about the last ten minutes) we never see the killer’s presence at all except as the voice of Lance Henriksen.

When a Stranger Calls 2006 emerges as a modest film, not truly memorable but equally neither one that joins the growing pantheon of modern horror remakes that disgrace their originals.