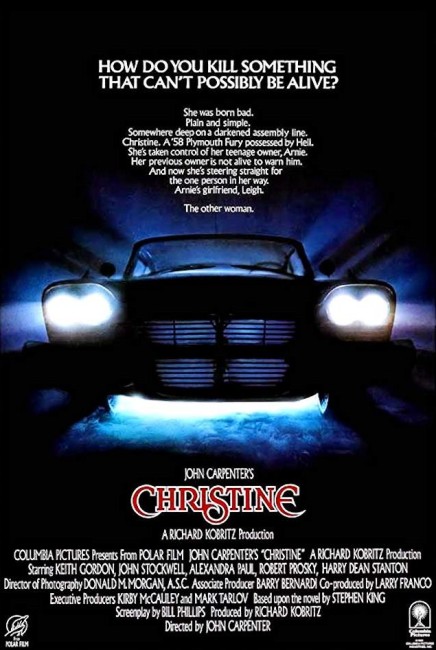 Bespectacled teenage wimp Arnie Cunningham is driving home with his best friend Dennis Guilder when he spots a beaten-up old 1958 Plymouth Fury. On impulse, he decides to buy it, much to the dismay of his parents. He obtains room at a local garage and spends all his time obsessively restoring the car, eventually rebuilding it in its original, gleaming glory. In doing so, Arnie changes from wimp to smoothly handsome, able to date Leigh Cabot, the most beautiful girl in the school. However, the car, which Arnie names Christine, is alive and jealously tries to kill her girlfriend rival. When a gang of bullies trash Christine, she rebuilds herself to hunt them down.

This John Carpenter-Stephen King pairing came at a time when both were riding at the height of their mutual successes. Stephen King was box-office gold all of a sudden – the same year that Christine came out also saw adaptations of Cujo (1983) and The Dead Zone (1983). John Carpenter was riding high on the success of the cult low-budget hit Halloween (1978) and successive films such as The Fog (1980), Escape from New York (1981) and the financial flop but fan hit The Thing (1982). Indeed, Carpenter and Christine screenwriter Bill Lancaster had originally started work on an adaptation of another Stephen King work – a production of Firestarter in 1982 – but this fell through (later to emerge as Firestarter (1984) starring Drew Barrymore). Undeterred, John Carpenter picked up the rights to Christine while they were still in galley proofs and began production before the book had even hit the stands.

In concept, Christine is like a malicious take on Disney’s Herbie films – see The Love Bug (1969) and sequels. The evil car had been done before in the enjoyable The Car (1977), but you could almost imagine Christine as some twisted parody of a Bruce Springsteen song. In sly ways, it digs into a certain teenage male’s preoccupation with the car. Stephen King construed it as a sly Freudian joke – the car is feminised, gets jealous and tries to kill off the owner’s girlfriend. Indeed, Keith Gordon’s cool and esteem and his ability to win the hottest girl in school improves in direct ratio to the way that the car moves from wreck to gleaming restoration.

Christine is at its best when the car finally gets to take on its own life. Under John Carpenter’s hand, the film glitters and shines like its protagonist’s purring chromium exhausts. Carpenter’s set-pieces with the car in action are the most exciting parts of the film. We see it charging after one victim and crushing its body into a narrow alley to go after him, and in another vision pursuing a running victim down a highway in flames like a demon from Hell. There is a dazzling special effects set-piece where it rebuilds itself into perfect gleaming form after having been trashed by the hoods.

Less effective is the story. The film is very faithful to the essence of the Stephen King novel – although, some elements such as the ghost of Roland Le Bay are dropped. If anything, the film remains a little too faithful. It retains the perspective of the best friend, played by John Stockwell, that Stephen King wrote the book from and never pulls one in through the central character’s descent. To this extent, apart from a few choice scenes, notably a wonderfully megalomaniac scene with Keith Gordon driving down the highway, we never see what is going on inside the character of Arnie. This leaves some annoying lapses such as Keith Gordon and heroine Alexandra Paul suddenly turning up together as an item without any lead-in or explanation of how they got together. It is as though a whole chunk of exposition ended up on the cutting room floor. Keith Gordon certainly gives a believable performance, as does John Stockwell, which helps compensate somewhat.

Keith Gordon made a number of acting appearances though the 1980s – he previously appeared as the resourceful teenage son in Brian De Palma’s psycho-sexual thriller Dressed to Kill (1980). Gordon later wrote the script for and played the lead in the eccentric but non-fantastic independent film Static (1986) about a man who believes he has created a tv that can view Heaven. Gordon became a director with The Chocolate War (1988) and has since directed episodes of the excellent Virtual Reality tv mini-series Wild Palms (1993) and other such efforts as the Kurt Vonnegut adaptation Mother Night (1996), the quasi-ghost story Waking the Dead (2000) and the Dennis Potter adaptation The Singing Detective (2003).