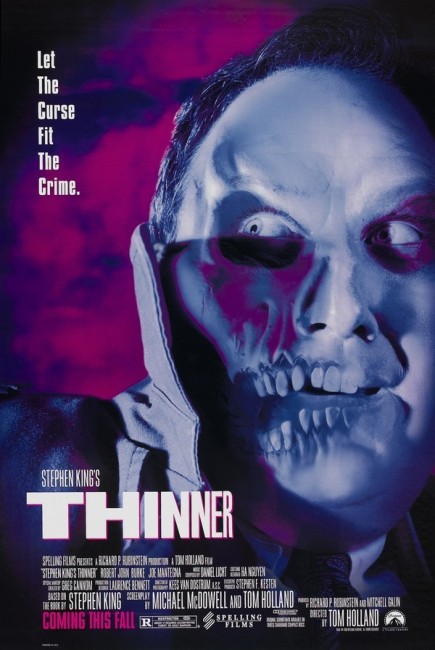 Billy Halleck is a lawyer weighing just short of 300 pounds. In his latest case, he succeeds in getting mobster Richie Ginelli off an attempted murder charge. While driving home, Billy is distracted at the wheel as his wife Heidi starts performing oral sex on him and hits a Gypsy woman as she crosses the street. At the inquest, the judge and police chief come together to sweep the matter under the carpet and clear Billy. Outside the courthouse, the Gypsy woman’s aging father Tadzu Lempke comes up and touches Billy on the cheek, saying the word “thinner”. Not long after, Billy finds that he is losing a remarkable amount of weight – 40 pounds in two weeks. He initially puts this down to his new diet but finds that he continues to lose weight no matter what he eats. He comes to realize that he, as well as the judge and police chief, have been the recipients of Gypsy curses. As Billy thins away to an anorexic husk, he learns that the only way he can remove the curse is to make the person who cast it voluntarily remove it.

In 1985, Washington bookstore clerk Steve Brown deduced that Richard Bachman, a minor author who had published several books with Rage (1977), The Long Walk (1979), Roadwork (1981), The Running Man (1982) and Thinner (1984), had a surprisingly number of similarities in writing style to Stephen King. After Brown tracked down the copyright listings, which confirmed that King was the copyright holder, he wrote to King and King fessed up, admitting that the Richard Bachman books were works that he was forced to put out under a pseudonym when publishers required that he release no more than one book per year. After the guise became known, the Bachman books were republished under Stephen King’s name. In more recent years, Stephen King has had surprisingly playful fun with his alter ego, announcing that Bachman had died of cancer and then publishing two Bachman books, The Regulators (1996) and Blaze (2007), that he claimed to have found in a trunk. Before Thinner, the only Richard Bachman book to have been filmed was The Running Man (1987), which emerged as an Arnold Schwarzenegger action vehicle that threw most of the book out.

This film adaptation of Thinner was directed by Tom Holland. Holland first emerged as a genre screenwriter with works like The Initiation of Sarah (1978), Class of 1984 (1982), The Beast Within (1982), Psycho II (1983), Scream for Help (1984) and Cloak and Dagger (1984). Holland made his directorial debut with the well received vampire film Fright Night (1985) and then went onto the non-genre Whoopi Goldberg comedy Fatal Beauty (1987), Child’s Play (1988), which started off the Chucky franchise, and the psycho secretary film The Temp (1993). Holland had previously ventured into Stephen King territory with the tv mini-series adaptation of The Langoliers (1995). Subsequent to Thinner, Holland appears to have vanished into the ether, only turning up as a director of one episode of Masters of Horror (2005-7) and the short-lived tv series Twisted Tales (2013).

As a scriptwriter, Tom Holland’s work had a great deal of promise but with each outing he made as a director, this gradually disappeared into a blandness. This blandness is certainly something that typifies Thinner. The script and direction never get to the heart of Robert John Burke’s horror. Tom Holland seems to concern himself only with external displays but never keys things in on a psychological level. Instead, we get silly dream sequences where Kari Wuhrer uses a slingshot to fire ball bearings through Robert John Burke’s hand and Michael Constantine pursues Burke in a huge semi-trailer, which are both unnecessary and ridiculously overblown.

Certainly, the makeup effects are highly convincing. As the 300-pound man, Robert John Burke is extremely believable – we even get a brief nude rear shot of his obese body. Unfortunately – either it seems because the technical facility to show such was not there or beyond the film’s budget – we correspondingly see nothing of the anorexic Burke, only his gaunt face with the rest of his body being kept huddled and swathed in clothing – meaning that the true horror of his wasting away is kept off-screen.

Part of the problem with the film also lies in Robert John Burke’s performance. When playing the obese half of the character, Burke plays Halleck as a wimpish pudding. However, when the character starts to thin, Burke adds a decidedly nasty undertow to his performance. However, this gets the character the wrong way around. The audience should have been allowed to despise the obese character for his amorality and callous insensitivity and then gradually develop sympathy for the curse-afflicted character and the powerlessness of his plight. In a classic story, this should have been the crux of the character’s redemption.

This is also symptomatic of the repellent messages that lie underneath Thinner. Most of the characters in the film are caricatures, in particular the Gypsies. The film would appear to (and wants to) uphold the moral message that the cover-up of the initial accident was wrong. However, the way it is played out, this is overlooked and the film then plays into racial prejudices about Gypsies – indeed, Thinner is only about two steps away from the satirically exaggerated caricatures of Gypsies that are a constant target of Sascha Baron Cohen’s Borat. By the end of the film, the Gypsies are shown to be the nasty, unforgiving and vengeful people that the prejudiced townspeople hold them up to be.

In an equally bizarre turn, the Mafia hood (Joe Mantegna) that Robert John Burke gets off becomes the rescuing hero of the film by employing gang-style strong-arm tactics. What should be the emotional thrust of the film about the central character learning from his mistakes becomes an altogether more repellent message about the central character standing up to make the Gypsies pay for daring to take revenge on him for covering up his complicity in a manslaughter.

Even that would not be as objectionable as the ending. Here Tom Holland has Halleck take the pie that the curse has been placed into and feed it to his unfaithful wife. It is only when Halleck sees that his beloved teenage daughter has inadvertently eaten some of the pie too that Halleck feels remorse and decides to eat some of it himself. However, this moment of character realisation is thrown away when his wife’s adulterer turns up at the door and Halleck then gleefully invites him in for a piece of pie. The pure nastiness of the film’s unconcerned justification for these acts and the glib throwing away the characters feelings of remorse in favour of further revenge make it a repugnant ending.

(Nominee for Best Makeup Effects at this site’s Best of 1996 Awards).