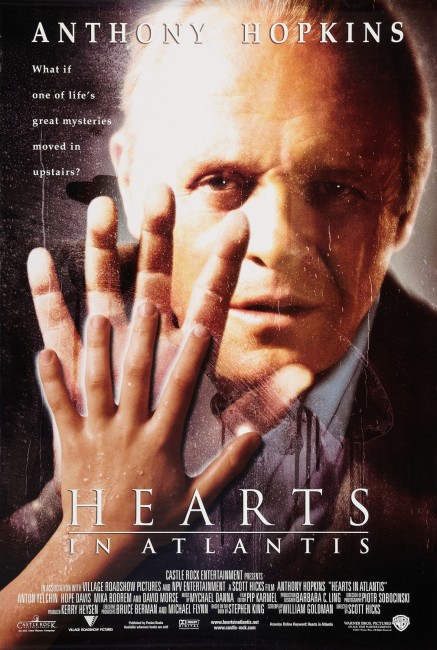 With the news of the death of one of his childhood friends, Bobby Garfield remembers back to growing up in the early 1960s. Following the death of his father, his mother was finding difficulty trying to financially support them both. Bobby then befriended Ted Brautigan who moved into the apartment above them. Despite Bobby’s mother’s suspicions, Bobby accepted Ted’s job offer of a dollar a week to read the newspaper to him, which Ted was unable to do any longer because of failing eyesight. Bobby then realised that Ted had psychic abilities and learned that he was hunted by sinister figures that he referred to as The Low Men.

Hearts in Atlantis is an adaptation that is taken from a Stephen King book Hearts in Atlantis (1999). Hearts in Atlantis was a collection of four overlapping stories all concerning people from the 1960s and how various events then played out in their later lives. The film is only based on one of the stories, the novella-length first section Low Men in Yellow Coats. The film has adapted this to work as a stand-alone piece – most notedly in cutting all reference that links the story up to Stephen King’s The Dark Tower universe (from which the Low Men came rather than being pursuing FBI agents as they are in the film). This also makes the title Hearts in Atlantis redundant as this was a metaphor that appeared in the second story, referring to a group of university students that played cards in seclusion as protests against the Vietnam War raged about them.

Since the mid-1990s, many cinematically released Stephen King adaptations – The Shawshank Redemption (1994), Dolores Claiborne (1995), Apt Pupil (1998) and The Green Mile (1999) – have sought to avoid the horror label. As a result, Stephen King has found himself inadvertently reinvented as an American heartland writer where his works are made to offer nostalgic and poignantly upbeat parables. These films tend to attract the sort of reviews that go “thank goodness Stephen King has finally gotten past all that horror stuff …,” even though the bulk of King’s literary output continues to remain squarely within the horror genre.

Hearts in Atlantis certainly falls into the Stephen King-adaptation-trying-not-to-be-a-horror-film territory – it has the feel of a film seeking Academy Award nominations written all over it. People will watch it and come away feeling uplifted and heartwarmed – alas, Hearts in Atlantis is not a very good film. It is produced by Castle Rock Entertainment (itself named after a town that appears in many King novels) who have produced a number of Stephen King adaptations – Misery (1990), Needful Things (1993), The Shawshank Redemption, Dolores Claiborne, The Green Mile and Dreamcatcher (2003), and whose creative head, director Rob Reiner, made the finest of the non-horror King adaptations Stand By Me (1986).

It stars Anthony Hopkins, who has become one of the most respectable dramatic actors in the world. It has one of Hollywood’s top veteran screenwriters William Goldman who was responsible for Butch Cassidy and the Sundance Kid (1969), All the President’s Men (1976) and The Princess Bride (1987), among others. It is directed by Australian Scott Hicks who previously made the thoroughly overrated Shine (1996), a movie cliché portrayal of mental illness that bore little resemblance to actual mental illness, but accrued seven Academy Award nominations, and other works such as Snow Falling on Cedars (1999), No Reservations (2007), The Boys Are Back (2009), The Lucky One (2012) and the Young Adult angel film Fallen (2016).

Hearts in Atlantis comes down to being yet another boy being given inspirational life lessons by an older man tale. We have seen this story told before in everything from Dead Poet’s Society (1988), The Man Without a Face (1993), Three Wishes (1995), Good Will Hunting (1997) to Finding Forrester (2000), which have mined this story to the point of cliché. Anthony Hopkins gives a dignified performance but Hearts in Atlantis never offers much that gets too exciting beyond its wistfully composed autumnal photography. The character arcs seem utterly predictable – the bullies, the romance, the mother being proved wrong in seeing Anthony Hopkins as a child molester, the mother’s fate when she goes to the conference. It is all easy, predictable and dreadfully unadventurous.

The promised climax seems to drift off without happening – The Low Men never emerge from off-stage as a tangible threat. Even Anthony Hopkins’ capture takes place offscreen – there is no heartbreaking parting of friends, just a quiet scene where the boy stands up and condemns the mother. Nor do the psychic powers ever emerge as a centre-stage plot element, only in occasional flashes, the most prominent of which is one where, without any motivation, young Anton Yelchin seems suddenly able to manifest mind-reading abilities in an encounter with a fairground cardsharp. Even the title seems a wishy-washy mix of mushy romantic drama and New Age woolly-headedness (although that is Stephen King’s fault, not the film’s).

The film’s period is well evoked. At one point, the film has Anthony Hopkins and Anton Yelchin going off to see Village of the Damned (1960), although this would surely have been impossible for eleven year old Bobby to do as Village was R-rated when it came out.